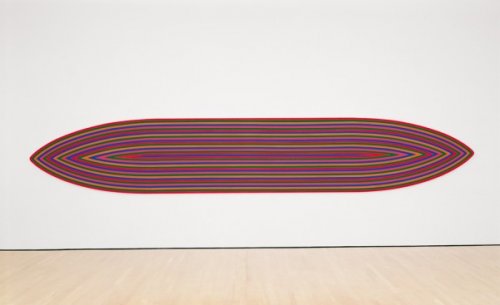 [ad#lb]
From February 5 to April 26, 2009, the Musée d’art contemporain de Montréal presents a major retrospective devoted to Claude Tousignant, a leading light of abstraction. Entitled Claude Tousignant, A Retrospective, the exhibition covers the artist’s career of fifty-plus years through ninety-one works, including drawings, paintings and sculptures, from his famous Monochrome orangé and his Transformateurs chromatiques, Gongs, Accélérateurs chromatiques, Diptyques circulaires, Polychromes and Monochromes series to his most recent pieces. It is the largest exhibition devoted to a single artist ever presented at the Musée. Laid out chronologically, the show takes up six of the museum’s eight galleries as well as the Atrium.

Encompassing the range of modernist expression, Tousignant’s pictorial practice is unique in the history of Canadian art. Throughout his career, the artist has shown an unwavering commitment to abstract art. From the outset, he was closely identified with the development of a resolutely non-representational form of Canadian art. He moved quickly towards a hard-edge approach, (uniform, sharply defined areas of colour), which he used to explore the potential of the colour field and the pure geometric form. Distinguishing himself from most of his contemporaries, he began creating serial compositions in which the whole picture plane is dynamized by the intrinsic and expressive properties of colour. However, it was his famous Gongs, concentric rings of colour, that established his reputation in the late 1960s. He has also always simultaneously explored the realm of sculpture, producing a corpus that ranges from the modest wood constructions of the 1960s to the recent Modulateurs luso chromatiques series of monumental sculptures in painted aluminum, where the intense colour cloaking each piece seems to vibrate in the surrounding space. In these works, Tousignant continues to probe the relationship between colour and light.

Claude Tousignant has left his mark on the history of contemporary art; his target paintings and large-scale compositions have become an essential reference in Canadian abstract painting. But beyond words and theoretical notions, this exhibition invites visitors to experience for themselves the power of his art, in vibrant, living colour.

An extensive program of activities is planned to accompany this major event (see the attached In Connection with the Exhibition).

Biographical Notes
Claude Tousignant was born in 1932 in Montréal, where he continues to live and work. He is one of those very few artists whose lives have been dedicated exclusively to their art. At school, the only classes that interested him were drawing and geometry. In 1948, he entered the School of Art and Design at the Montreal Museum of Fine Arts. Of all his teachers, Gordon Webber (himself a former student of Laszlo Moholy-Nagy) was the most influential in guiding his career, as he introduced him to avant-garde art and modern art theories, particularly those of the Bauhaus. A great many exhibitions have been devoted to Tousignant’s work. Among the most important are his first exhibition at the café L’Échourie, in 1955; the show at the Galerie l’Actuelle in 1956; and The Responsive Eye, at New York’s Museum of Modern Art in 1965. He represented Canada at the 8th Bienal de São Paulo in 1965. In the following years, the retrospective Claude Tousignant opened at the National Gallery of Canada in 1973, then travelled to galleries including the Musée d’art contemporain, the Vancouver Art Gallery, the Art Gallery of Ontario and the Canadian Cultural Centre in Paris; Claude Tousignant: Sculptures was held at the Montreal Museum of Fine Arts in 1982; and Claude Tousignant: monochromes, 1978-1993 was presented at the Musée du Québec in 1994. In addition to the 1973 retrospective, the Musée d’art contemporain devoted an exhibition to him, titled Dyptiques 1978-1980, in 1980. A number of major museums have Tousignant works in their collections; among those that have kindly agreed to lend them to us for the duration of the exhibition are the National Gallery of Canada, the Musée national des beaux-arts du Québec, the Montreal Museum of Fine Arts, the Musée d’art de Joliette, the Leonard & Bina Ellen Gallery of Concordia University, the Robert McLaughlin Gallery in Oshawa, the Nickle Arts Museum at the University of Calgary and the University of Lethbridge Art Gallery.

Over the course of his career, Claude Tousignant has won the prestigious Victor Martyn Lynch-Staunton Award (presented by the Canada Council for the Arts for outstanding achievement by mid-career artists), in 1974, and the Prix Paul-Émile-Borduas (the highest visual-arts distinction awarded by the Québec government), in 1989. He was also appointed an Officer of the Order of Canada in 1976.