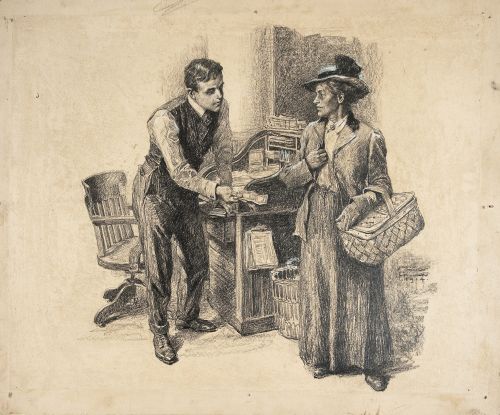 WILMINGTON, DE (March 14, 2011) – The Delaware Art Museum presents Escape to Adventure: Focus on Arthur E. Becher, featuring 40 paintings and drawings from the Museum’s celebrated collection of original illustrations, on view March 19, 2011 – December 31, 2011. The exhibition features scenes of adventure ranging from historical exploits in exotic locales, romantic entanglements, and personal dramas stemming from contemporary crises, such as the sting of discrimination and the shame of unemployment.

In the late 1890s, German émigré Arthur E. Becher studied privately with artists in Milwaukee before joining Howard Pyle’s prestigious school of illustration in 1902. During his two years with Pyle, Becher honed the mastery of detail and nuance of expression and gesture that brought him success as an illustrator. He had a particular skill for the diversionary and escapist fiction that was a mainstay of the books and magazines of his time. His illustrations took readers away from their daily routines and into an array of vicarious dangers, pleasures, and intrigues. His work reflected the moral messages common in fiction of the period, often accenting American “can-do” values, though sometimes also challenging stereotypical assumptions about class and gender. Like Howard Pyle, and his fellow Pyle students in the exhibition — including Stanley Arthurs and Ethel Franklin Betts — Becher captured the eye without giving away a story’s plot, beguiling readers into a purchase, or even better for a magazine publisher, a subscription.

One of the highlights of the exhibition is a series of illustrations for Long Live the King, a story by Mary Roberts Rinehart, a celebrated and successful American author of mystery stories. Becher portrays the story’s main character, a reluctant young heir to a foreign kingdom, following him through palace conspiracies, spying, and kidnapping, all set against the boy’s wish to lead a normal life. This series will serve as inspiration for What’s Your Adventure?, an interactive space in the gallery where children can create and illustrate their own fantastical and adventurous stories.