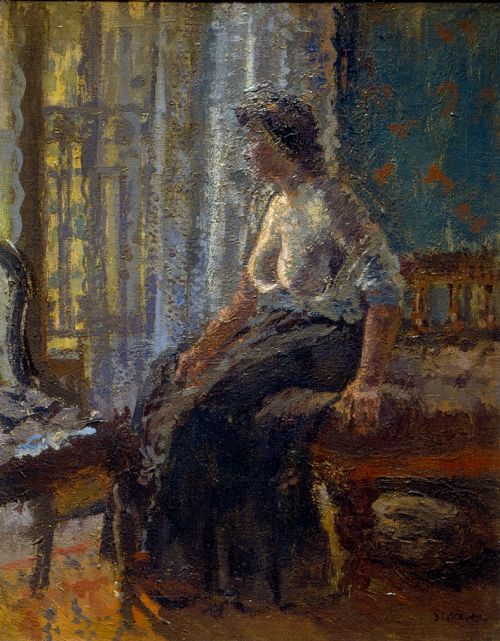 The Fine Art Society is staging a large-scale Centenary Exhibition of the Camden Town Group to mark its foundation and first exhibition in 1911. The show will consist of around sixty pictures by all the principal members to present a thorough survey of their output, many of which have come from the artists’ descendants and have never been seen before. There has been considerable interest in the Camden Town Group in recent years, with Tate Britain holding a major exhibition in 2008 and significant publications appearing on Walter Sickert. It will open exactly 100 years after the Group’s first exhibition in June 1911.

Led by Walter Sickert the Camden Town Group was at the forefront of modern art in Britain in the years running up to the First World War. The artists took as their subject matter the everyday lives of ordinary Londoners and the glitter and grime of the modern city itself. Painted in the dry, crusty paint and pulsating Post-Impressionist colour harmonies of Spencer Gore, Harold Gilman, Charles Ginner and Robert Bevan, or the darker, sleeker Old Master tones of Sickert the Camden Town Group introduced new modes of painting to Britain, inspired by the work of Van Gogh, Gauguin and Degas.

The Group took its name from the seedy district of London where Sickert lived, an area that he claimed ‘had been so watered with his tears that something important must sooner or later spring from its soil’. Sickert was the charismatic leader and great wit of the Group who held a firm commitment to capturing the beauty and pathos of ordinary life. His subjects were nudes, chars and coster girls, painted in the diffuse light of North London bedrooms and essentially Sickert was an Impressionist painter devoted to the fleeting effects of light, and who had learned his craft directly from his
friends Whistler, Degas, Monet and Pissarro.

The Camden Town Group is revered by School of London artists such as Lucien Freud, Frank Auerbach and Leon Kossoff whose own work uses London and the experience of the city as the inspiration for their own pictures. The present exhibition will be the only one to mark the Centenary of the Group’s founding and is expected to generate considerable attention. Works for sale will be accompanied by a small number of loans.