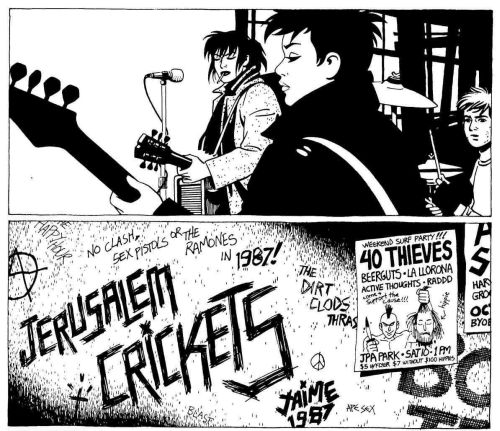 The Cartoon Art Museum is pleased to announce its latest exhibition, Love and Rockets: A 30th Anniversary Celebration, a career-spanning retrospective exhibition including more than 60 pieces of original artwork from the groundbreaking Fantagraphics comic by Jaime, Gilbert and Mario Hernandez.

About Love and Rockets:

In the fall of 1982, Fantagraphics published its first issue of Love and Rockets, a black-and-white magazine featuring stories and art by the brothers Jaime, Gilbert and Mario Hernandez, a.k.a.

Los Bros. Hernandez. These early comics, informed by the brothers” love of Archie comics, science fiction, punk rock and their own SoCal Latino heritage, laid the foundation for one of the most ambitious, influential and acclaimed indie comic series of all time.

It”s hard to overstate the impact that Love and Rockets has had on independent comics over the past three decades. Small-press comics began with the underground comix boom of the 1960s and gained traction in comic book specialty shops in the 1970s with the success of Dave Sim”s Cerebus and casino online Wendy and Richard Pini”s Elfquest. In the 1980s, Love and Rockets kicked off an entirely new alternative comics scene. Los Bros. blended high comedy with high drama, juxtaposed magical realism with stark reality, and explored interpersonal relationships with rare sensitivity and insight.

Love and Rockets also highlighted people who”d rarely been seen in comics before. Up to that point, Latino characters had rarely appeared in comic books, but Los Bros.” comics were populated by a largely, and sometimes exclusively, Latino cast of characters. In the 1980s, Love and Rockets was also unusual for its strong female lead characters, extensive female supporting cast, and positive portrayal of LGBT relationships. Over the years, Love and Rockets has been widely praised by Latino cultural associations, and Jaime Hernandez has been praised by GLAAD for tackling gay and lesbian issues.