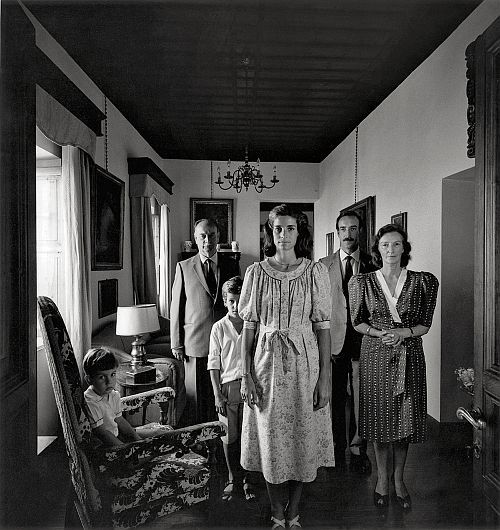 The exhibition is organized by the French Academy in Rome in collaboration with the Vancouver Art Gallery, which hosted the first phase in March 2013. Curated by critic Jean-François Chevrier and artist Jeff Wall, the exhibition is part of the XIIth edition of the International Photography Festival in Rome (Fotografia – Festival Internazionale di Roma). For the first time in Italy the exhibition proposes approximately a hundred works of different sizes by the artist, covering forty years of his career: intimate portraits, rural landscapes, city outskirts, still lives. A corpus of images tracing a map of Europe, where the profundity of history is indissolubly linked to the present, in a complex multiple-formed narration revealing fundamental aspects of the national identity and class of the subjects he has portrayed.

Patrick Faigenbaum is one of the most important figures of contemporary photography. His works are present in major institutions such as the Metropolitan Museum of Art in New York and the Centre Pompidou in Paris. In 2008 the Grenoble Museum dedicated an important retrospective to him. On 10 June of this year Faigenbaum won the prestigious Henri Cariter-Bresson award, an authoritative prize that has enabled him to realize the “Kolkata” project, dedicated to the city of Calcutta.

Faigenbaum acquired international fame in the 1980s. Between 1985 and 1987 he was fellow at the French Academy in Rome – Villa Medici, where he began working at the renowned series of portraits of Italian aristocrat families, which he realized in Florence, Rome and Naples. Thus the exhibition celebrates the return of the Parisian artist to Villa Medici.

Initially, his work was linked to traditional painting concentrating on characters and portraits within a timeless context. In later years, his career brought him to focus on the real world: cities and nature, through the techniques of both black & white as well as colour.

Critic curator Jean-Francoise Chevrier, who has followed Faingenbaum since the beginning of his career and knows him better than anyone else, says: “The alternation of black & white and colour gives evidence to the coexistence of two worlds that correspond to two different eras, which today have become simultaneous. Colour arrived after the family portraits, when Faigenbaum began exploring urban issues. However, black & white, that is to say the shading of greys, still persists. This is the domain and source of chiaroscuro, the condition of the body being apprehended within atmospheric volume. It gives the air that cinder-like weight which favours the modulation of light and moulding of forms. More abstract than colour, black & white has discretely introduced a fantastic element into the probable if not truthful imagery of everyday reality “.

And Jeff Wall adds: “Patrick Faigenbaum works at constructing what can be understood as a ‘historically telling image’, one that reveals some substantial aspects of the national and class identity of his subjects. His success is apparent; he captures a strong sense of the poised aloofness and confidence of these people, characteristics for which they have been famous for centuries.”

The exhibition is open to the public from 4 October 4 2013 to 19 January 2014, and will be inaugurated by the artist on Thursday, 3 October.