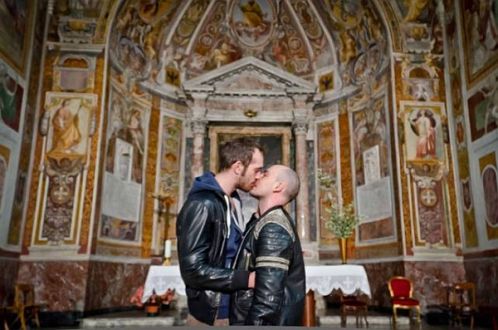 The Galleria L’Opera is pleased to present “Trialogo”, an exhibition of artists Mauro Maugliani, Gonzalo Orquín and Luis Serrano from 25 September to 15 November 2013.

The exhibition inaugurates Andrea Iezzi’s new Gallery of modern art, an area geared to host the voices of all the new trends in contemporary art, without exception.
“It is absolutely not a generalizing pretext, but rather an aesthetic evaluation: this space has been conceived for those who think that art is not dead, who believe that contemporary art is not only and exclusively created with the alphabet of conceptual art; finally, for those who deem that all art, supported by some sort of thought, is conceptual: painting included.”

The three artists have been invited by journalist and art critic Edoardo Sassi to realize three works on decidedly anti-conventional themes and, above all, to treat them in a non-conventional fashion: Suore, Matrimoni, Interni (Nuns, Weddings, Interiors) is the subtitle of this unusual alienating group exhibition, where the impulse of the creative artists involved has generated paintings, sculptures, sites, videos (located in a cemetery where we hear rosaries being sung), “speaking” sofas and “heretical” kisses, stolen at the foot of the altars of some of the most important ancient basilicas in Rome.

“A few months ago, everything was clear from the very beginning: the artists would be three – writes Sassi in his preface to the catalogue – three for each of the works on display. Roughly speaking, three are also the generations represented, in the intent of attributing to a single ‘creative generation’ the limited canon of a decade.” And he continues: “Three friends, moreover, and obviously three painters who are good, or better still, excellent, graced with a talent that can be neither acquired nor improvised.”

A true “Trialogue” of art, in which each artist is represented not only by a large painting (work which corresponds more or less to the expressive idiom they had been accustomed to use up until today), but also to other more experimental interpretations of the same theme. Thus, a work that has seen the three artists confronting each other with different techniques, from photography to installations, from flash mob style actionism to textiles.

The protagonists have defined this exhibition a ‘challenge’, “that foregrounds beauty, a theme which today has almost become subversive and therefore true avant-guard, starting from painting as a classic form of art, the kind of art which speaks for itself without having to be explained, but which succeeds in putting to test the many-sided artist, who must try to discover up to what point he is truly able to play with all the idioms of contemporaneity.

Hyper-realist painter Mauro Maugliani is fond of defining himself a conceptual artist, conceiving his painting as a point of arrival after a long mental process. In this exhibition he presents the results of his research into the mysterious world of nuns. A large portrait toys with gender and identity ambiguity, depicting the face and bust of a young nun, who is however attired in a priest’s cassock. A sculpture in sugar evokes the idea of the sacred world and its relics. And still another installation invites the public to visualize a video from a prie-dieu, modified, however, in a pop-confessional mood like the environment that hosts it.

The poetics of Gonzalo Orquín is strongly intimate and his painting seems to be situated in an imaginary zone suspended in time, while still depicting ultra-real everyday life, where memory combines with eroticism. In this exhibition the Spanish artist tackles the theme of weddings in a pluralist manner: one, rather “bourgeois”, is represented on a large canvas where a complex game of shadows and mirrors multiply the image of a young couple; the second one is more utopian and sends a message of universal love through collective action in the background of the historical Churches of Rome; and finally, thanks to a sentimental lyrical installation of great intensity in wunderkammern style, the last work is narrated with a backwards leap in time.

Spanish Luis Serrano is mainly a figurative artist; full of suggestions and allusions, his work pits itself against all the traditional genres, reinventing them by blending realistic, symbolic and literary connotations. In this exhibition he has explored the theme of interiors. One of his works is particularly linked to autobiographic memories: in an old family manor house in the Mancha region, an old couch abandoned in an attic has become a plastic, formal excuse for “singing” forms upon which are deposited the signs of time and lost seasons. A painted, sculpted, drawn, fabric sofa…