Alberto Giacometti and the etruscan masterpiece The Shadow of the night 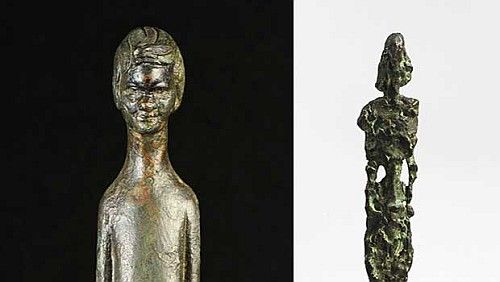 From 28th September to 13th October 2013 the Palazzo Magnani Foundation presents an incredible event involving two icons of the history of arts, The Shadow of the night, an Etruscan masterpiece dating from the 3rd Century b. C., and Femme debout (1956) by Alberto Giacometti, a historical master of the 1900s, within a strongly evocative exhibition. Moreover, the event will continue at the Guarnacci Etruscan Museum in Volterra from 26th October to 3rd November 2013.

The event will start in October (the month when Alberto Giacometti was born – 10th October 1901) and is part of the Project Art Agenda. Face to face with … developed and sponsored by the Palazzo Magnani Foundation of Reggio Emilia.
By comparing and contrasting two works of art so distant in time but also so near in terms of expressive strength, the close connection will be illustrated between ancient and modern arts and the great fascination of ancient history on the exponents of avant-garde movements in the 1900s.
The project, implemented in collaboration with the Guarnacci Museum of Volterra and the Municipal Museum Network of Reggio Emilia, is supervised by Chiara Gatti and explained by texts by Fabrizio Burchianti, Director of the Etruscan Museum of Volterra, and Roberto Macellari, Archaeologist at the Municipal Museum Network of Reggio Emilia.

The comparison and contrast between the Etruscan masterpiece and one of the famous femmes debout by the great Swiss artist has been for some time part of the popular imagery owing to the similarities connecting their thin and slender silhouettes. Meaningfully, recent studies showed that Giacometti, in his passionate study of ancient and classic works, paid great attention to the Etruscan world since he was fascinated by the search for expressive statues and the ancient origin of oblong forms. Such forms date back to prehistoric times and derive from ancestral feelings and archetypal images of human beings originating from Etruscan civilization and persisting until Giacometti’s time.

The Shadow of the Night is one of the most emblematic and representative objects of the Etruscan people. This slender and elongated Etruscan bronze statue is part of the Guarnacci museum in Volterra and has always been one of the symbols of one of the most mysterious civilizations in history; it is also a powerful model for Giacometti’s typical works.
The studies conducted by a researcher in the history of arts, Chiara Gatti, stress the similarities connecting Giacometti’s works to a distant past. It is well known that the Swiss sculptor was very interested in the past and constantly reflected over primitive arts: as a boy he copied details from masterpieces from ancient ages and distant cultures on the sides of the pages of his father’s books in his house in Stampa (from Egyptians to Chaldeans, from Fayoum to Byzantium). In a typewritten text included in the Marchiori Archive in Lendinara, Giuseppe Marchiori – the great art critic – defined the human beings sculpted by his friend Giacometti “thin shadows printed on trachyte pavements”. He was the first to compare the thin bodies produced by the Swiss artist and the Shadow of the Night, and wrote they were “like Nuragic warriors, without spears or shields, or similar to the Volterra idol, to the men of the night”.