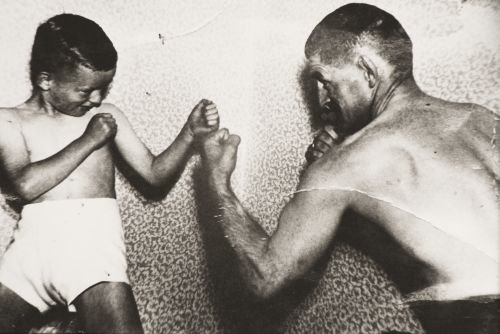 Carel van Hees, known as a dedicated documentary photographer and film makers, takes on the role of story-teller in Museum Boijmans Van Beuningen. In the late seventies and early eighties, Van Hees followed the heroic and at the same time tragic life of boxing champion Cor Eversteijn (1949-1983).
In the Willem van der Vorm gallery of Museum Boijmans Van Beuningen, Carel van Hees (1954) depicts the rise and fall of the Eversteijn phenomenon.
The focus of the exhibition is the last fight, against the English champion Cliff Gilpin. Carel van Hees shows this last fight, in which Eversteijn was knocked out in the first round, through black and white photography. Original archive photographs and video material show the life of the boxer, both inside the ring and outside. The exhibition also includes video interviews in which family, friends, boxers and coaches talk about Eversteijn.
Cor Eversteijn was not only multiple Dutch boxing champion, he was also a dandy, a barber and a celebrity in Rotterdam. But his success also had a dark side. His fight with life, in which he regularly sought the solace of drink and drugs, ultimately proved fatal for Eversteijn.

The fight with life
The exhibition does not show some boxing cliché of victory, but shows also the loss. As Carel van Hees writes: “The life story of Cor Eversteijn is a metaphor for the many faces of heroism. On the one hand, Eversteijn recognised and used his talents and opportunities and constantly wanted to do even better than he had before; on the other, he lost himself in his quest to manage the fear, temptation and adversity which went hand in hand with his success.”