Luis Tomasello installation at The Nelson-Atkins Museum of Art

An installation by Argentinean artist Luis Tomasello (b. 1915) will be installed in the Bloch Building at The Nelson-Atkins Museum of Art beginning Oct. 31, offering visitors the chance to see work by a renowned Kinetic artist from the Optical Art movement of the 1950s and 1960s. The public will be able to meet Tomasello on Nov. 10 from 10:30 a.m. to 12 p.m. The artist will celebrate his 96th birthday while in Kansas City. 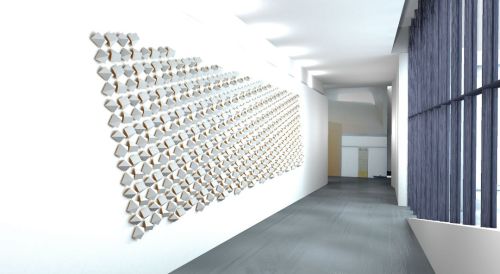 Tomasello is known for his atmosphère chromoplastique, in which he poses white cubes on an identical white background, creating an engaging optical effect of play on light and shadows. The underside of each angled shape is painted a fluorescent color, which reflects off the surface of the white wall, producing a subtle chromatic glow.

Chromoplastic Mural, as depicted in the above mock-up image, will consist of 672 12-centimeter, seven-sided polyhedrons, which will be produced by Eric Mehaffey, Inc. in Kansas City. The polyhedrons are made of painted wood.

“We are delighted to bring Luis Tomasello’s art to the Nelson-Atkins, where visitors can experience the work of a contemporary Latin American artist,” said Julián Zugazagoitia, CEO & Director of the Museum. “Tomasello has spent a lifetime exploring the optical effects of his work and the impact on viewers. Our Gallery Walk in the Bloch Building is the perfect canvas for this installation.”

The work will be installed on the east wall between Modern & Contemporary galleries and the African gallery, and the wall faces a long window that looks out on the Kansas City Sculpture Park. The public is invited to watch the installation in progress during public hours beginning Wednesday, Nov. 2 until the installation is complete.

“Installing Tomasello’s work in the Bloch Building illustrates the importance of activating public spaces at the Nelson-Atkins,” Zugazagoitia said. “This works brilliantly with Steven Holl’s architecture, and our hope is to continue this dialogue between art and architecture in the future. We began with Scumaks in Bloch Lobby, followed by more than 40 Rodin sculptures in the lobby, and now Op Art by Tomasello.”

Tomasello is primarily associated with Kinetic art, a 1960s movement prevalent in Paris, especially connected to the Denise René Gallery. Kinetic art refers to work that moves or that gives the sensation of movement through its optical effects. It also depends upon the active participation of the spectator because as viewers move in relation to the overall work, the light, colors and surfaces appear to change dramatically. In 1965, Tomasello’s work was included in an exhibition on Op art, or Optical art, which became well known in New York through William Seitz’s show, The Responsive Eye, at The Museum of Modern Art.

After studying painting at the Academy of Fine Arts in Buenos Aires, Tomasello settled in Paris in 1957, where he currently lives and works. He exhibited with a group of artists whose research took them from constructive abstraction to cinetism, an art form founded on optical illusion that was popular from 1950 through 1963. He showed at numerous national and international exhibitions of Op-Art, including the landmark show “La Lumiere et la Mouvement” (1967). He is represented by the Sicardi Gallery in Houston.

“Tomasello’s work is fascinating to visitors, who quickly become engaged in the active play of his surfaces with light, color and shadows,” said Leesa Fanning, associate curator, Modern & Contemporary Art. “The shape of the objects, the pattern of their placement and the repetition become even more enlivened as viewers move in relation to the work.”