Ritsue Mishima – Glass works at the Gallerie dell’Accademia in Venice 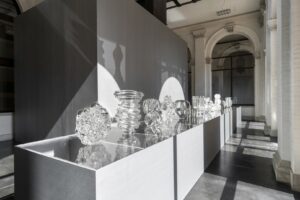 From 17 September to 30 October 2022, the Gallerie dell’Accademia in Venice will be hosting the “Ritsue Mishima – Glass works” exhibition, conceived and planned on the occasion of the Italian Glass Week 2022. Curated by Michele Tavola, the exhibition presents 32 sculptures in glass, created specifically for the spaces on the ground floor of the museum, where they will establish a dialogue with the works of Antonio Canova, whose bicentenary anniversary of his death falls this year.
Ritsue Mishima was born in Kyoto in 1962 and she moved to Venice in 1989. Having established a residence in Kyoto in 2011, she lives and works between the two cities. Awarded the Giorgio Armani Prize for best artist in 2001 at the Sotheby’s Contemporary Decorative Arts Exhibition, her works are now exhibited in various international museums, such as the Musée des Arts décoratifs in Paris and the Vangi Sculpture Garden Museum in Japan, and are part of prestigious collections such as those of the Boijmans Van Beuningen in Rotterdam, the Coesfeld Alter Hof Herding in Germany and the Frans Hals Museum in Holland. She has also undertaken numerous forays into the worlds of design, architecture and fashion in the form of major partnerships with prestigious brands such as Issey Miyake, Max Mara, Bottega Veneta and with the champagne producer Perrier-Jouet.
The unprecedented exhibition at the Gallerie dell’Accademia runs along the Palladian corridor on the ground floor and opens with nine small silvered-glass Meteoriti (Meteorites) whose grainy, irregular surface interacts with the whiteness of Canova’s bas-reliefs.
An explicit reference to Canova is represented by the composition entitled Lottatori (Wrestlers), which, with its title, recalls the terracotta of the same name by the great Veneto-born sculptor displayed in Room 10 in the elegant display case designed by Carlo Scarpa. Canova produced this work in 1775, himself inspired by the antique sculptural group conserved in the Uffizi. Mishima’s work is divided into two distinct elements, worked separately and wrapped in glass cords, and symbolises the daily creative struggle of craftsmen as they work the medium of glass.
Continuing through the exhibition, the Tablino houses some works in crystal glass (Vento, Arca di luce and two versions of Cellula: Wind, Arch of light, Cell) positioned in front of Cicognara’s desk, while in the stairwell of the impressive Scala ovata designed by Andrea Palladio, the spectacular Colonna di luce (Column of Light) extends over eight metres in height, formed of ninety rounded elements, each similar but all different in their uniqueness.
The exhibition concludes in the atrium in front of Palladio’s monumental courtyard, with a mirror surface on which fifteen works echo the reflections of the Venetian canals, almost forming a hypnotic and certainly unique installation.
Ritsue Mishima’s refined and elegant creations, drawn from the centuries-old craft traditions of Murano, are also a tribute to the Venetian lagoon culture, with their constant reference to water and light. Nature and its primordial elements – water, air, earth, fire – have always been a source of inspiration for the artist, whose transparent and colourless glass sculptures melt the contours of light, becoming part of their surroundings. Natural forms and patterns evoke both abstract and mythological concepts: Fiore di mare, Vento, Sole, Chronos, Medusa, Infinito (Sea Flower, Wind, Sun, Chronos, Medusa, Infinity) are just some of the works that will be exhibited for the first time at the Gallerie dell’Accademia.
As Mishima explains, “every colour can be found in transparent glass. Glass becomes pure light and the light reflects the surrounding space. Reflected light inspires me and takes me to another dimension. The real concept of my work is not glass, but light”.
“Ritsue Mishima creates her works in Murano, following in the centuries-old tradition of the island,” says Giulio Manieri Elia, Director of the Gallerie dell’Accademia. “She is an artist who is very sensitive and responsive to the contexts in which she exhibits her works: transparent or silvered glass, which does not impose itself but proposes a very natural and discreet dialogue with the environments and works with which it shares the space. We have chosen to dedicate the Palladian wing on the ground floor to the artist, where Antonio Canova’s plaster casts are displayed, and where we are certain that they will trigger new and unexpected conversations with Mishima’s glass”.