Following the great success at the Grand Palais in November 2009 in Paris, OpenArtCode group will exhibit in July 2010 in London. This time, the OpenArtCode artists will present and promote their art in a gallery on the River Thames in the heart of London, at the Gallery@Oxo. OpenArtCode London will donate a portion of the profits in support of AGBI Artists’ General Benevolent Institution, of which HRH The Prince of Wales is the Patron. 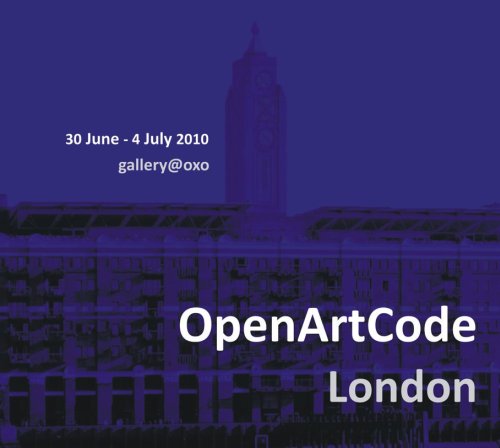 A high quality catalogue will document the show and will be sold in selected bookshops of museums and exhibitions, sold online and, of course, at the show. Proceeds from sales of the catalogue will go entirely to AGBI. On Thursday 1st July at 3.00pm there will be a catalogue signing at the Royal Academy of Arts in association with the A.G.B.I.

OpenArtCode brings together some of the best international artistic talent in order to exhibit in the art capitals of the world. The artists have very different technical styles ranging from abstract to hyper realistic. They have united in the past to exhibit in Paris at the Grand Palais and in Monaco at the Auditorium Ranieri III.

Gallery@oxo is owned and managed by Coin Street Community Builders. It is situated on the riverside walkway at the heart of one of the richest cultural areas of London, between the London Eye, the Hayward Gallery and Tate Modern. Oxo Tower Wharf is a landmark building on London’s South Bank.

A private view will be held on Wednesday 30th June at 6pm.
Opening hours: 11am – 6pm
from 30th June – 4th July
For further information:
www.openartcodelondon.com