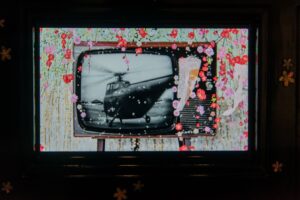 The new Marilyn Monroe biopic Blonde made its long-awaited première at the 79th Venice Film Festival. According to director Andrew Dominik, the film is an “emotional nightmare fairytale” which chronicles Monroe’s often tragic life, from her troubled upbringing through to her death aged 36 in 1962.

The life of the Hollywood star was punctuated with happier moments, most notably her 1954 trip to east Asia, where she performed to US troops as part of an official United Service Organizations (USO) tour. As Monroe later recalled, the trip “was the best thing that ever happened to me. I never felt like a star before in my heart. It was so wonderful to look down and see a fellow smiling at me.”

The trip took place during Monroe’s honeymoon with Joe DiMaggio. Piqued that more fans turned out in Japan to see Monroe instead of him, the baseball player refused to join her in South Korea. This didn’t deter Monroe who performed ten shows in four days, in front of audiences that totaled more than 100,000 soldiers and marines. Monroe is reported to have said, “I never thought I had an effect on people until I was in Korea. It was the greatest thing that ever happened to me.”

She later said of her performance in front of thousands of troops in the bitter February weather, “It was snowing, but I felt warm.” The latter being an expression that has recently been paraphrased for the title of a powerful new body of work, ‘The Days were Snowy but Warm’, from South Korean artist Oh Myung Hee, currently also showing in Venice – at the Biennale.

The exhibition is themed around Reflections — a concept that Oh Myung Hee has interpreted through both the cool gaze of the historical long lens and the close-up of deeply personal family stories.

Following Marilyn Monroe’s visit, the doors swung open even further, with the Hollywood star inspiring many Korean women to pursue their own dreams and become who they wanted to be. Yet, the social undertow of male privilege and inertia meant this progress has been surprisingly slow — and even more marked when set against Korea’s extraordinary economic growth over the last three decades.

This tension – and resonance – of female emotions within a patriarchal society has been captured to startling effect in ‘The Days were Snowy but Warm’.

The Days were Snowy but Warm, showing at the Biennale’s Personal Structures exhibition in Palazzo Mora, builds on the powerful energy displayed within Oh Myung Hee’s works since she came to prominence in the early nineties with an oeuvre featuring vibrant scarves drifting over green grass. Her paintings and images overflow with colors and emotions that seek to embody the powerful prism of femininity and freedom. The exhibition is on display until the end of November 2022.