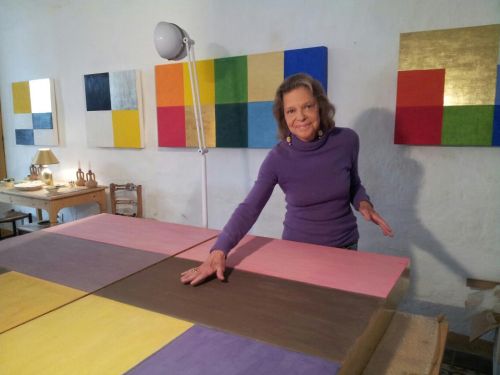 “Architetture di Luce” (“Light”s architectures”) tells the story of a kind of painting which is at one time structure and emotion, in perfect armony with the surrounding environment of the gallery, a strongly bright and with Lecce”s typical stones featured environment.

The exhibition presents a captivating way through Obering”s art, and its synthesis between the abstract rigour of the American minimalist tradition and the sense of the form, the chromatic sensuality, the love for techniques and materials” affectation inspired by the Italian Middle Ages and Renaissance.

More than twenty works – some of which are here displayed for the first time – “like in a polyptych of the 14th century, creating a polyphonic system, a simultaneous perception of the different elements and their connection to form a unit which both comprehends and surpasses them” (M. Pizzarelli). The captivating lights” play and the opaque-bright tommyztunez surfaces relationship are at the basis of the geometric scheme to which the E-lite Studiogallery”s Lecce”s stones architecture gives a contribute in order to generate a great emotional impact.

The American artist proves once again to be leading an artistic career of high level, which she started more than forty years ago. A visual fascination, an expressive strenght, a vital burst, which, through the fusion between the love for the classical mediterranean form and the minimal alphabet of the recent American tradition, let Obering “lead the visitor by the hand just to let him/her look at things through her enchanted eyes”, as Pizzarelli states in her essay on Obering published in the volume “Verso Sud”.