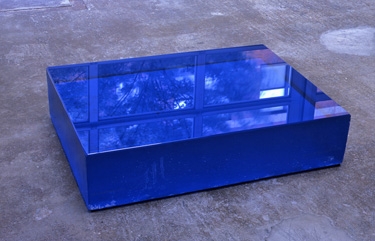 The Art Institute of Chicago announces a landmark presentation of one of the country’s leading private collections of contemporary art, Contemporary Collecting: Selections from the Donna and Howard Stone Collection, on view June 25 through September 19, 2010 , in the Modern Wing’s Abbott Galleries and in the eponymous Stone Film, Video, and New Media Gallery. The first public exhibition of the Stones’ collection, it features 59 works by artists ranging from Gerhard Richter and Sol LeWitt to Rosemarie Trockel and Lawrence Weiner . Fifty of the works on display are designated as promised gifts to the museum, joining 42 works the Stones have previously given or promised to the Art Institute. Together these works represent one of the largest gifts ever made to the Department of Contemporary Art at the Art Institute.

“It is an honor to add the names of Donna and Howard Stone to the Art Institute’s distinguished list of benefactors,” said James Cuno, President and Eloise W. Martin Director of the museum. “Taking its place among the Art Institute’s other legacy gifts, Donna and Howard’s contribution reminds us that all art was once contemporary. As our visitors come to know and love the galleries of the Modern Wing, they will undoubtedly find works that speak to them on the same level as our beloved masterpieces from earlier times. The Stones’ gifts will most surely be cherished among the museum’s new classics.”

The Stones have built a rich, intergenerational assortment of art in all media over the past three decades. While there is a focus in the exhibition on the Minimalist and Conceptual schools of the 1960s and 1970s, including works by artists such as Sol LeWitt, Dan Flavin, Fred Sandback, and Richard Tuttle, there are also substantial works by younger artists, such as Gabriel Orozco, Roni Horn, Robert Gober, and Felix Gonzalez-Torres, who were deeply influenced by that previous generation. With consideration given to works produced in Chicago and beyond, the collection has grown into a truly international representation of contemporary art-making practices of the last 50 years.

Highly apparent in the exhibition is the lively yet serious conversation the Stones have created about classic “high” modernism and the various responses to it over the decades. Only in such a collection would visitors see Ellsworth Kelly with Cady Noland, Jeff Wall with Robert Ryman. In this sense, Contemporary Collecting acts as a vibrant introduction to contemporary art in the second half of the 20th century, through the eyes of collectors deeply invested in and supportive of radical thought and form.

Contemporary Collecting: Selections from the Donna and Howard Stone Collection is accompanied by a 160-page, full-color catalogue, published by the Art Institute and distributed by Yale University Press. The publication includes a forward by Art Institute President and Eloise W. Martin Director James Cuno; an introduction to the collection by James Rondeau, Frances and Thomas Dittmer Curator and Chair of Contemporary Art and curator of the exhibition; an essay by Judith Russi-Kirshner, dean of the College of Architecture and the Arts at the University of Illinois at Chicago; and an in-depth interview with Donna and Howard Stone. The illustrated checklist of 231 works serves as a record of the Stones’ holdings for years to come. Both the exhibition and catalogue celebrate the Stone’s major gift to the Art Institute.

About Donna and Howard Stone

Donna and Howard Stone are consummate Chicagoans. Their support of local universities and artists is unmatched, and their commitment to the Art Institute has been long-standing. Both have been highly active members of the Society of Contemporary Art for many years. Howard has served as a trustee and Chairman of the Committee on Contemporary Art since 2003, and Donna has been a key member of the Committee on Prints and Drawings since 2006. Their gifts and extended loans have long graced the Art Institute’s galleries of contemporary art, exposing visitors to some of the most important work of our time. Underscoring their dedication to film, video, and new media, the couple gave 15 works in this genre to the museum in 2007. These pieces, along with other examples from the Art Institute’s collection, are routinely shown in the Donna and Howard Stone Film, Video, and New Media Gallery, which they endowed to celebrate the opening of the Modern Wing in 2009.