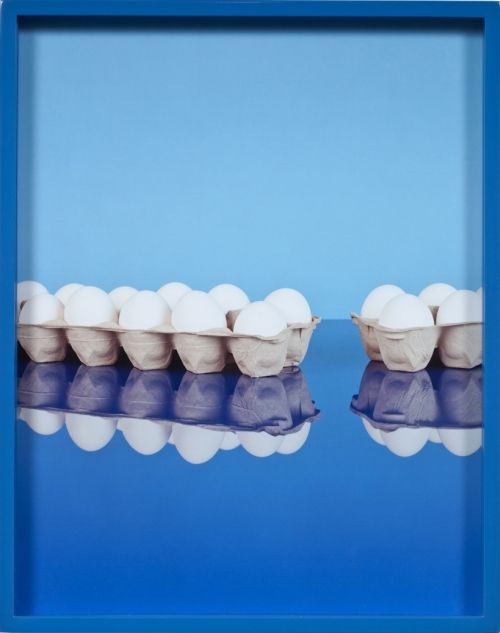 The Contemporary Art Museum St. Louis is pleased to present a new exhibition by Tel Avivborn, Los Angeles-based artist Elad Lassry. Featuring recent and new works, this exhibition will be the artist’s first major museum monograph in the United States.

Lassry’s intimately framed photographs slip effortlessly between genres and iconographies, capturing plastic still-lives, uncanny publicity portraits, collages, animals, and landscapes.
Thoroughly familiar and blank at the same time, his images move beyond the simple category of “photography” and instead ask us to revisit the perceptual experience of a picture.

Duplicating and then cloistering his subjects within saturated fields of color, excised from their original context, Lassry attends to the singularity of his subjects, while also immersing them in their own formal properties. While clearly depicting specific objects, people, animals, or places, the images are overwhelmed by their own colors, shapes, and patterns, effectively merging their representation with their abstraction.

Lassry’s photographs often slide between stillness and movement—challenging the eye to register, in certain blinks, fleeting vibrations in the picture. Whether through layered exposures (reminiscent of early techniques in “ghost photography”) or the staccato rhythm of colors, and between field and ground, his still-lives and portraits possess a seductive, if slippery, hold on our vision. Ever suspicious of the status of photography, Lassry also paints his frames with richly saturated hues, camouflaging his images and flirting with the nature of the monochrome, and the photograph’s own status as an object.

Sum of Limited Views spotlights the artist’s recent explorations, including several new works, with a focus on Lassry’s capacity to create the “unstill” picture. Also featured in the exhibition will be a survey of his 16mm films, which, like his photographs, blur the experience of the still and moving image. Presented in a black-box gallery, reversing the conditions of the photographic experience, Lassry’s films flex the strain between realism, narrative, and abstraction. Combining over thirty photographs with his 16mm films, Sum of Limited Views presents an overview of an artist’s exploration in making pictures.

Elad Lassry was born in 1977 in Tel Aviv, and he lives and works in Los Angeles. He has presented work throughout the U.S. and Europe, including a recent monographic survey at Kunsthalle Zürich and an exhibition of three films at the Whitney Museum of American Art, New York. Other exhibitions include the Art Institute of Chicago; the Museum of Contemporary Art, North Miami; Rubell Family Collection, Miami; Institute of Contemporary Art, Philadelphia; New Museum, New York; Orange County Museum of Art, Newport Beach; and Gallery 400, University of Illinois at Chicago, Chicago. Lassry presented his photographs in The Front Room at the Contemporary Art Museum St. Louis in 2008.

Elad Lassry: Sum of Limited Views is curated by Anthony Huberman and Laura Fried and organized by the Contemporary Art Museum St. Louis.