A Ballad of Love and Death at Musée d’Orsay (Paris) 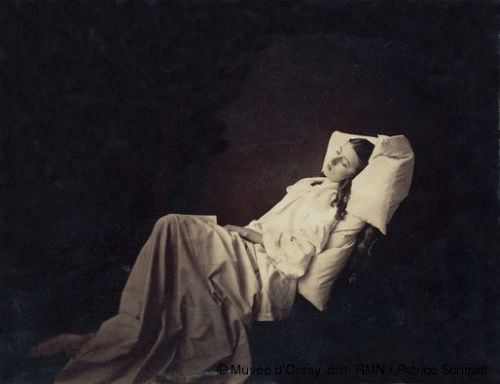 In the second half of the 19th century, during the heyday of Victorian England, the aesthetic principles of the Pre-Raphaelite painters were frequently echoed by the photographers of the time who aspired to be recognised as artists in their own right. Like the painters, they too were influenced by the writings of John Ruskin, the leading theoretician of the Pre-Raphaelite movement. He advocated a return to nature and to craftsmanship, and championed a very precise, exalted view of medieval Gothic architecture whose high moral qualities he considered to be under threat from industrialisation.

The Victorian Pre-Raphaelite photographers and painters knew each other. They tackled the same historical themes, inspired by Dante, Shakespeare, Byron and Lord Tennyson, the Poet Laureate. They also turned to modern life for their more socially aware and morally instructive subjects, with the result that many of the paintings by John Everett Millais, Dante Gabriel Rossetti and Ford Maddox Brown, and the photographs by Julia Margaret Cameron, Roger Fenton, Lewis Carroll and Henry Peach Robinson shared a common vision. This exhibition reveals the rich, productive dialogue that developed between painters and photographers.