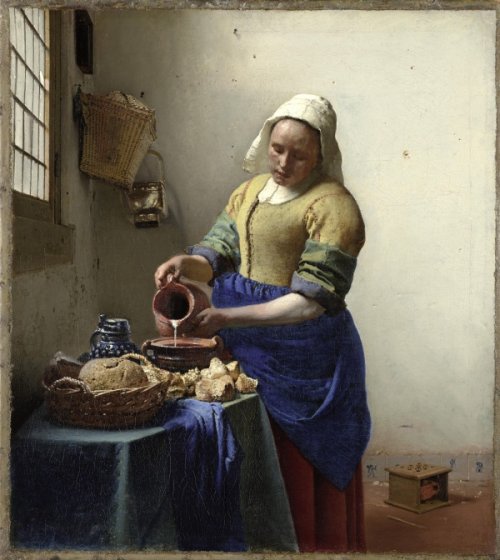 [ad#lb]
On the occasion of the 400th anniversary of Henry Hudson’s historic voyage from the Netherlands to New York, the Rijksmuseum in Amsterdam is sending The Milkmaid, perhaps the most admired painting by the Dutch artist Johannes Vermeer (1632—1675), to The Metropolitan Museum of Art. To celebrate this extraordinary loan, the Metropolitan Museum will present Vermeer’s Masterpiece The Milkmaid, a special exhibition beginning on September 10, which will also include all five paintings by Vermeer from its collection, as well as a select group of works by other Dutch artists, placing Vermeer’s superb picture in its historical context. The exhibition will mark the first time that the painting has traveled to the United States since it was exhibited at the 1939 World’s Fair 70 years ago.

The exhibition is made possible by the William Randolph Hearst Foundation, Daphne Recanati Kaplan and Thomas S. Kaplan, and Bernard and Louise Palitz.

Along with Rembrandt and Frans Hals, Vermeer is now counted as one of the greatest Dutch artists of the Golden Age. Until a century ago, however, his rare paintings – only 36 survive today – were little known and often misattributed.
During his brief career, Vermeer sold his exquisite works to a small circle of discerning collectors in his native Delft, and in the neighboring court city of The Hague. The Milkmaid, dating from about 1657-58, was one of the first paintings by Vermeer to be purchased by the Delft collector Pieter van Ruijven, who by 1670 owned 21 of the artist’s works.

In addition to the Metropolitan Museum’s five Vermeer paintings – Young Woman with a Water Pitcher (ca. 1662), A Maid Asleep (ca. 1656–57), Study of a Young Woman (probably ca. 1665–67), Woman with a Lute (ca. 1662–1663), and Allegory of the Catholic Faith (ca. 1670) – this focused presentation will include
important works by Pieter de Hooch, Gabriël Metsu, Nicolaes Maes, Emanuel de Witte, Hendrick van Vliet, and Hendrick Sorgh, all masters who, like Vermeer, were active during the remarkable period of exploration, trade, and artistic flowering that occurred during the Dutch Golden Age in the 17th century.
Vermeer’s Masterpiece The Milkmaid will also feature several works on paper that illuminate the artist’s theme, including engravings by Lucas van Leyden (The Milkmaid, 1510) and Jacques de Gheyn II (The Archer and the Milkmaid, ca. 1610), both from the Metropolitan Museum’s collection, and Jacob Backer’s beautiful drawing A Woman with a Jug (ca. 1645), on loan from the Maida and George Abrams Collection.

Vermeer’s Masterpiece The Milkmaid is organized by Walter Liedtke, Curator in the Metropolitan Museum’s Department of European Paintings.

The exhibition will be accompanied by a fully illustrated publication “The Milkmaid, by Johannes Vermeer” by Walter Liedtke and will be for sale in the Museum’s bookshops ($9.95).

A variety of educational programs will accompany the exhibition, including “Vermeer: Art in the Making,” a November 6 panel discussion in which Curator Walter Liedtke and Conservator Dorothy Mahon of the Metropolitan Museum will join curator Arthur Wheelock and research conservator Melanie Gifford from the National Gallery of Art, Washington, to discuss Vermeer’s style and techniques. Additional programs include screenings of documentary films about the artist and an audio podcast for children ages 10-13 on the Museum’s website.

An Audio Guide of the exhibition will be available for rental ($7, $6 for members, and $5 for children under 12).
The Audio Guide is sponsored by Bloomberg.

Cities Here and Now: Paintings and Installation Works by Lu Hao Tree of Paradise: Jewish Mosaics from the Roman Empire