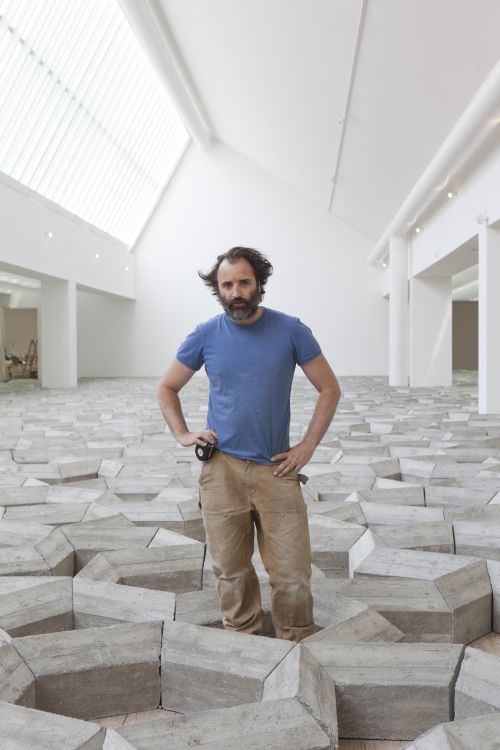 Mike Nelson (b. 1967) is one of the most appreciated artists of his generation. His work predominantly features sculpture and meticulously constructed, large-scale architectural installations. In this new work created for Malmö Konsthall, Nelson uses the institutional architecture as a backdrop for a massive concrete workshop. The exhibition space is divided by a glass wall into two spaces; a smaller production workshop and an exhibition space stripped back to its original configuration.

The production workshop will be used to cast several thousand concrete blocks, which are to be laid out across the floor, a lattice work cast like a net across the remaining area of the exhibition space. The 408 tons of cast concrete blocks will be carried out and placed on the floor in a geometric pattern, a minimal form that is evocative of early decorative designs, widely used within many religious and comparative belief systems. Nelson is interested in making the process transparent, emphasizing what is actually there; 408 tons of imperfect geometry within the architecture of Malmö Konsthall. The visibility of the workshop and the process of casting reiterate this desire for clarity. The tonnage has been calculated in relation to the load bearing of the wooden floor, taking into account the weight of the concrete structure combined with the weight of the potential visitors.

The meaning of this work is neither prescribed nor didactic. However the sense of weight and the suggested ideologies of the cast, existing upon and within the late modernist design of Malmö Konsthall, are intended to affect us viscerally as well as intellectually. The mesmeric perspective of the repeating pattern induces a meditative, introspective state to invoke an understanding in a more ‘felt’ manner, one that incorporates the political into the phenomenological.

This sea of cast concrete at Malmö Konsthall is a new work by Mike Nelson, that recollects his early works such as Untitled (1991); Cast concrete wall in context (1992); Cast Kufic script from the khulufa mosque built by m. Makiya in 1960-63 (1993) and A staging of the reconstruction of the southern palace of Babylon (1993). The work reconnects with a foundation of more minimal works, throwing light on some unanswered aspects of Nelson’s highly acclaimed artistic path.

For the last two decades Nelson has created works, installations and spaces that we, as an audience are fascinated by. His installations can be compared with stage sets; however computer game structures or tombs could be deemed more appropriate. Here there are hidden doors to literature, corridors under tons of concrete, rooms with sacred voodoo shrines and labyrinthine walks so unresolved that their absurdity can only be compared with those experienced in dreams.

Mike Nelson (born in Loughborough, England) lives and works in London. Nelson represented Britain at the Venice Biennale in 2011 and his work has been presented in major group and solo exhibitions throughout the world: Off-site projects A Psychic Vacuum, Creative Time, New York 2007; Tate Triennial 2009; Psycho Buildings at the Hayward Gallery 2008; September 11 at MoMA PS1, 2011, and at various biennales (Venice 2001, Sydney 2002, Istanbul 2003, São Paulo 2004, Singapore 2011).