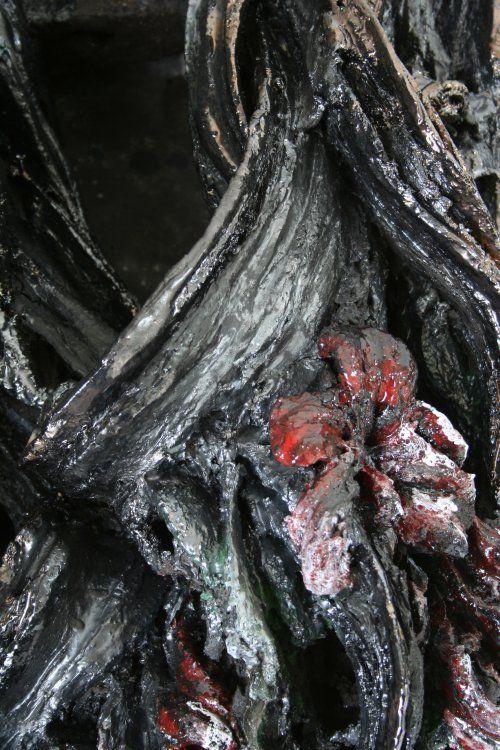 Museum Boijmans Van Beuningen’s Intervention #13 presents recent work by Rotterdambased artist Anne Wenzel (1972). Wenzel is showing a steel and ceramic installation made specially for the museum. The installation Requiem of Heroism – an abandoned heroic monument – was developed at the European Ceramic Workcentre.

Anne Wenzel’s installation fits seamlessly with the architecture of the collections building designed in the 1930s by the municipal architect Van der Steur. This environment is an integral part of Wenzel’s work. At the intersection of the four small galleries stands an enormous commemorative wreath with wilting white and blood-red lilies. The four niche-like galleries – with several dark fallen wreathes behind gratings – act as annexes to the monument.

Monuments
Anne Wenzel is known for her gloomy sculptures and installations, often made from ceramics. In these works she shows us the unexpected beauty hidden in menace, devastation, disasters and decay. Her works allow the viewers ample room for their own interpretations. Wenzel has been fascinated for some time with the function and design of commemorative monuments. The installation in Museum Boijmans Van Beuningen does not commemorate a specific event, but elucidates her exploration of the act of commemoration in general. Wenzel’s monument suggests not only the heroic, glorious moment at which the wreathes were laid, but also the gradual process of decay as the lilies wilt.

Anne Wenzel’s oeuvre
Anne Wenzel was born in Schüttorf in Germany, but has lived and worked in Rotterdam for many years. She has been nominated for several prestigious prizes, including the Dolf Henkes Prize (2009) and the Prix de Rome (2007). In 2009 she participated in a group exhibition at the Museum voor Moderne Kunst in Arnhem and in 2006 she had a solo exhibition at Buro Leeuwarden. Her work is included in various museum collections, including Museum het Princessehof in Leeuwarden and S.M.A.K. in Gent.

Interventions
Intervention #13 – Anne Wenzel has been organised by the Curator of Museum Boijmans Van Beuningen’s City Collection, which focuses attention on developments in contemporary art in Rotterdam. Intervention #13 is displayed in the four small galleries that link the old collections building with the new exhibitions wing. Museum Boijmans Van Beuningen gives contemporary art a prominent place in a series of presentations that reflect upon the museum’s collection or its architecture. The juxtaposition of new works with existing objects from the collection encourages visitors to look closer and stimulates their imagination.