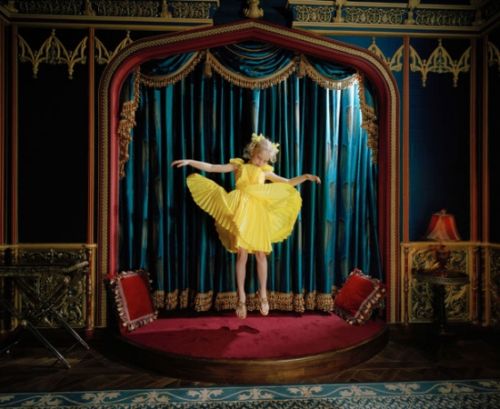 Moscow Museum of Modern Art and Grinberg Photos Company present the First large-scale presentation in Moscow of a project by a young photographer Anna Skladmann.

The project Little Adults comprises photos of children, whose parents are some of the most famous and influential figures in the present-day Russia. Anna’s protagonists are wealthy inheritors, kids of rich parents. They are from 6 to 12 years of age. These children have grown up in a very special environment. They look and behave like adults. From an early age they have been brought up to be the new elite. It is very like a child’s dress-up play – children ‘rehearse’ their future roles. The frank straight look in their eyes radiates awareness of their privileged status. With her camera Anna explores what it means to be a rich child in Russia, where hierarchy and social stratification are so highly pronounced. In this context it is only logical for the artist to opt for the style of representational portrait, as this choice evokes Russia’s imperial past and reveals the ambition of the new rich to be seen as successors of the pre-revolutionary elite. Contemporary history of Russia abounds in examples of the ‘ups’ and ‘downs’ of ‘nouveaux riches’. The children portrayed being unaware of these dangers, still greater is the latent tension inherent in Anna Skladmann’s works.