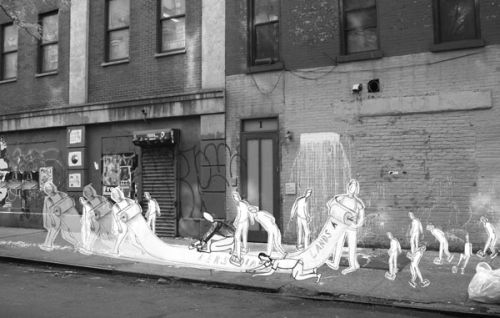 From May 4 to May 14, 2011, the Solomon R. Guggenheim Museum will present Intervals: Futurefarmers, the fourth installment of its contemporary art series designed to reflect the spirit of today’s innovative practices. For its Intervals project, the San Francisco–based art collective Futurefarmers is creating a site-specific installation on the Rotunda floor of the museum and organizing intimate participatory programs for the public in various spaces around the city of New York.

The Leadership Committees for the Intervals series and Intervals: Futurefarmers are gratefully acknowledged.

Futurefarmers creates projects that are diverse both in terms of their production and their strategies of audience engagement. If anything typifies a Futurefarmers project, it is a balance of critical and optimistic thought with the use of inventive and pragmatic design elements. Recent works include antiwar computer games; an online registry of unused arable land sites in San Francisco that could be used for gardening and food production; and lunchboxes that incorporate hydrogen-producing algae. For the Guggenheim’s Intervals series, Futurefarmers is creating a ten-day “urban thinkery” centered around a shoemaker’s atelier consisting of a cobbler’s bench and shoe racks and installed in the Guggenheim Museum’s Rotunda. The atelier is an open interpretation of Simon the Shoemaker’s fifth-century Athens studio in which Socrates supposedly had extensive philosophical discussions with Simon and local youth.

The Futurefarmers shoemaker atelier is the anchor for a series of off-site actions and events taking place throughout the city. Three Sole/Soul Sermons, commissioned by Futurefarmers and written and delivered by contemporary writers, will be offered in the atelier. The collective will also host intimate public Dialogues with contemporary thinkers and participants in special interior and exterior spaces around the city, as well as conduct a series of Ink Gathering walks with special guests and small groups of enthusiastic visitors. During these walks, the groups collect sidewalk dirt, the main ingredient in a unique Futurefarmers ink that will be used to transcribe the Sole/Soul Sermons and the Dialogues for posterity in participatory urban actions called the Pedestrian Press. Three times during the project, passersby on the streets will be called upon to form the Pedestrian Press and help print the texts, using 36 specialized printing shoes, on long strips of paper that will be rolled out along New York sidewalks.