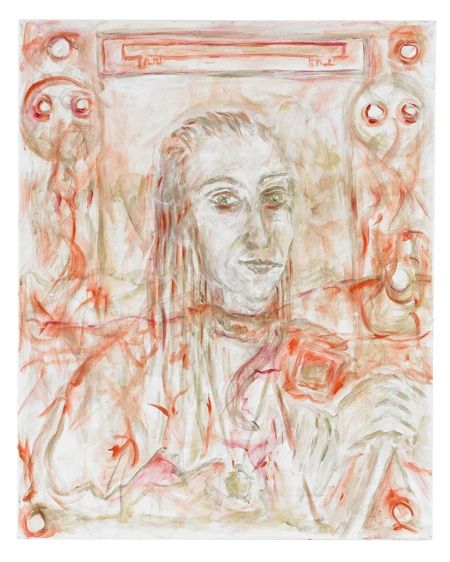 Jutta Koether is a painter, performance artist, musician, critic and theoretician. Her works incorporate distinct elements of punk and underground culture. The Thirst at Moderna Museet is Jutta Koether’s most extensive museum exhibition, and her first in Scandinavia so far. Her work has previously been shown at Kölnischer Kunstverein, Van Abbemuseum and Kunsthalle Bern. The Museum of Modern Art (MoMA) in New York recently acquired a work by Jutta Koether for the permanent collection.
During the exhibition at Moderna Museet, Jutta Koether will appear in her live performances with Kim Gordon (Sonic Youth) and Tony Conrad.

Jutta Koether, born in 1957 in Cologne, has belonged to the alternative arts scene for many years and has inspired artists in both Europe and the USA. Her interdisciplinary practice includes painting, music, poetry, film and performance. Jutta Koether works in New York and Berlin and is a professor at the Hochschule für bildende Künste (HfbK) in Hamburg.
The exhibition at Moderna Museet features some 40 works by Jutta Koether from 2004 to 2010.

Her conceptual paintings are inspired by many different sources, and are often combined with or commented on by performances. Jutta Koether always challenges the prevailing norms and never fulfils the usual notions of what is regarded as art. Instead, viewers are forced to reflect on their own expectations. In Koether’s attack on pure abstraction and the highbrow canon, she uses materials that are foreign to “fine” art, including cheap trash such as chains, rings and studs that she glues to her works. Koether also comments on art by producing remakes of works by male artists, including Nicolas Poussin and Francis Bacon. Woman as an artist is a theme in Jutta Koether’s monumental red female portraits of famous women such as the celebrated opera singer Maria Callas and the pop icon Kylie Minogue.

Jutta Koether is inspired by artists and intellectuals who have created an alternative to mainstream culture, including the underground filmmaker Kenneth Anger and the musician Patti Smith. Koether has also collaborated with Tom Verlaine (Television) and Kim Gordon and Thurston Moore (both from Sonic Youth). In connection with the preview on 4 March, Jutta Koether and Kim Gordon will present a performance at Moderna Museet. A performance with the video artist, musician and poet Tony Conrad will take place on 8 April.

The richly illustrated exhibition catalogue, with a foreword by Daniel Birnbaum and essays by Iris Müller-Westermann, Isabella Graw and David Joselit, is co-produced with Koenig Books.