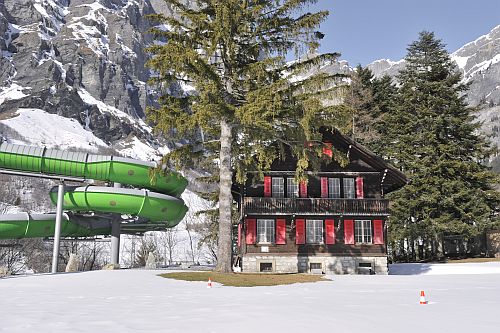 Sublime summits, delightful lakes, peaceful valleys – the classical image of the Swiss landscape was shaped by photography at a very early stage. What has become of that landscape? In its current exhibition “Adieu la Suisse!” the Fotostiftung Schweiz tracks down objective changes not only in the reality, but also in our view of the Swiss landscape. The deconstruction of former photographic myths has given rise to new contemporary views of Switzerland.
We still have little inclination to rid our minds of old images of an untouched Swiss landscape.
The attractiveness of an idyllic or spectacular nature still persists. Yet our admiration for the corresponding scenarios originates in a projection: the Alpine landscape in particular always served to symbolize a life of freedom in harmony with nature. And photography made a significant contribution to that symbol. Well into the 20th century, many Swiss photographers showed a clear preference for Alpine and rural regions, paying little attention to the urban world. Their works express a deeply-rooted collective fantasy that is often far removed from the real conditions.
Today, Switzerland is one of Europe’s most densely populated areas, its population growing by 80,000 people annually; the built-up area has increased by about 25% in 20 twenty years.
Three-quarters of all Swiss people live in cities or urban agglomerations. It is no longer possible to ignore the changes to the landscape: every second, about one square metre of nature disappears – almost ten football pitches a day – under roads, parking lots, shopping centres and houses. Adieu la Suisse! These fundamental upheavals demand new images – photographs that instead of conjuring up a past Swiss Arcady, address the theme of change and confront the reality of today.
In its exhibition “Adieu la Suisse!” the Fotostiftung Schweiz presents a new, topical Swiss panorama made up of selected works by contemporary Swiss photographers. With just a few exceptions, the works on show were taken after the turn of the millennium: in their sensual, playful or ironic approaches they respond to today’s challenges, while also being sensitive and unblinkered. What they have in common is a gaze that is unbiased, curious, and trained on the apparently accidental, but that also adds subjective concepts and strategies to the documentary process. To the fore is not a plain and simple accusation, but a constant and subtle questioning of reality.
With photographs by Jean-Luc Cramatte, Nicolas Faure, Yann Gross, Andri Pol, Christian Schwager, Jules Spinatsch, Martin Stollenwerk, a video work by Erich Busslinger and historical photographs from the collection of the Fotostiftung Schweiz.