TEFAF Maastricht has built its reputation as the world’s most influential art and antiques fair on the unique quality of its exhibits. The 24th edition at the MECC (Maastricht Exhibition and Congress Centre) in the southern Netherlands from 18-27 March 2011 will include great rarities and recent rediscoveries among more than 30,000 works of art, all rigorously vetted by committees of international experts. Among them will be the last fragment of an Egyptian water clock still in private hands, a painting containing one of the few self-portraits of Bernardo Bellotto, and a bronze by Gustave Courbet rediscovered after being lost for more than a century. 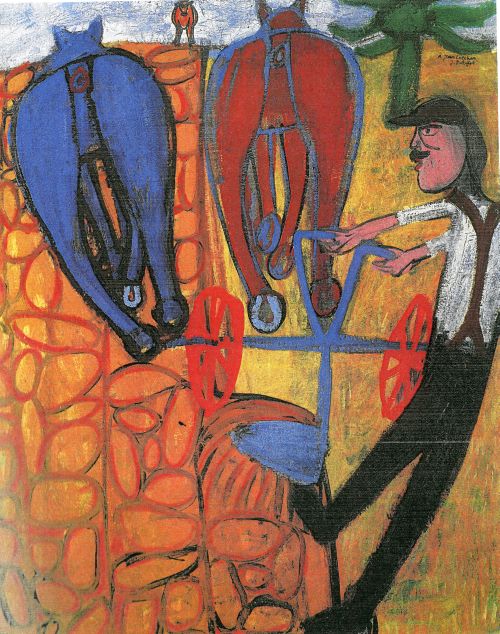 The European Fine Art Fair also provides talented younger dealers with an opportunity to exhibit at the Fair on a one-off basis through TEFAF Showcase. The six successful galleries for 2011 have been chosen from 80 applicants and are from France, the United Kingdom and the United States.

The introduction of TEFAF Paper, for galleries specialising in drawings, watercolours, prints, photography, manuscripts and antiquarian books, in 2010 was a great success and will be repeated at the 2011 Fair. The section will be reinforced by an important loan exhibition from the Rijksmuseum in Amsterdam entitled Director’s Choice: The Happy Hunter.

The latest Art Market Report commissioned by TEFAF will focus on how modern and contemporary works of art fared between 2009 and 2011. It will also examine how the international art market as a whole performed as it moved out of the global recession.

Great works of art at TEFAF 2011 will include:
• The only fragment of an Egyptian water clock remaining in private hands.
Commissioned by Alexander the Great in Egypt c332-323BC, it depicts Alexander offering wine in front of the goddess Hathor. Water clocks were used to measure time in temples to ensure that rituals were performed at the appropriate hour. It will be offered for sale by Galerie Harmakhis of Brussels for €150,000.
• A painting containing one of the few self-portraits of Bernardo Bellotto.
Architectural Capriccio with a Self-Portrait of Bellotto in the Costume of a Venetian Nobleman dating from 1761-1767 depicts the lavishly clad artist extending his arm proudly towards his palatial surroundings. Otto Naumann of New York will exhibit the picture priced at €8.2 million
• The magnificent Portrait of a Gentleman which has been out of sight in private collections for decades and has been newly attributed to the 17th century Flemish painter Michael Sweerts. Johnny van Haeften of London will be offering the painting for sale at TEFAF for €1.1 million.
• A major work from Jean Dubuffet’s earliest period. Dechaumage au Brabant, painted in 1943, has been hidden in a bank vault for more than 20 years. In perfect condition, it will be exhibited by Landau Fine Art of Montreal priced at €1.5 million.
• La Veuve by Tamara de Lempicka was exhibited at two important exhibitions in Paris in the 1920s. It was bought from the artist by a collector in 1925 and has only been seen in public twice since then. Kunsthandel Frans Jacobs of Amsterdam will bring it to TEFAF where the price will be in the region of €300,000.
• A rare sculpture by Gustave Courbet rediscovered after being lost for more than 130 years. La Liberté is a powerful depiction of freedom and is the only bronze cast of the image created by Courbet in 1875. It will be shown by the New York dealer Richard Feigen. The price will be €630,000.
• A superb pair of bronzes representing the deities Venus and Mars by the Renaissance sculptor Tiziano Aspetti from Padua. They are in fine condition with a beautiful patina. Altomani & Sons of Milan will offer them for sale for a price in the region of €150,000.
• One of the most important examples of Gandharan art from the Swat Valley in what is now Pakistan. The life-size figure of Buddha Dipamkara is a rare monumental image dating from the 3rd or 4th century and will be shown by Marcel Nies Oriental Art of Antwerp.

TEFAF Showcase
TEFAF Showcase was started three years ago to give recently established galleries the opportunity to participate in TEFAF on a one-off basis and to gain experience of being part of an international fine art event. An international committee composed of TEFAF members and independent art specialists has selected six participants for TEFAF Showcase in 2011. They are:
• Crispian Riley-Smith, a specialist in Master Drawings, from North Yorkshire in the United Kingdom. He will be bringing Dutch and Flemish watercolours and drawings from the 16th to the 19th centuries to TEFAF.
• Galerie 1492 from Paris. Run by Yannick Durand, this gallery specialises in Pre-Columbian and colonial art of the Americas.
• Galerie David Ghezelbash, also from Paris, dealing in classical antiquities from Greece, Rome, Egypt and the Middle East.
• Gibson Antiques Ltd from London. Founded by Alastair Gibson, a former director of Sotheby’s, the gallery specialises in Chinese ceramics and works of art.
• Galerie Sophie Scheidecker from Paris dealing in modern and contemporary art. Sophie Scheidecker has curated exhibitions in Europe and North and South America.
• Elle Shushan Fine Portrait Miniatures from Philadelphia in the United States. Elle Shushan is a leading international dealer in portrait miniatures and has contributed to several landmark publications.
“We had 80 applicants for Showcase, far more than last year,” says Ben Janssens, Chairman of the Executive Committee of TEFAF. “It was a difficult decision as there were quite a number that were good enough to exhibit in Showcase. We were looking for disciplines that are not represented at the Fair and for quality.”

Director’s Choice: Masterpieces from the Rijksmuseum at TEFAF Paper
TEFAF Paper, a successful new section at the last Fair, will have an important loan exhibition in 2011. Wim Pijbes, Managing Director of the Rijksmuseum, Amsterdam, will bring his personal choice of late 15th century works on paper from the museum’s collection to TEFAF. Director’s Choice: The Happy Hunter will show prints and drawings with a hunting theme.

“TEFAF is the best hunting place for private and professional collectors,” says Wim Pijbes. “I am honoured to be able to present an exquisite selection of the best and rarest works on paper from our own collection. I have chosen the title The Happy Hunter as a metaphor for TEFAF.”