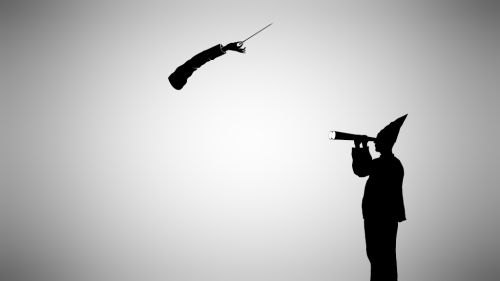 The aim of this project is to highlight a specific sector of Chinese video art by focussing attention on its particular origins. What do the artists selected see when they look around? Chaos! Overwhelming disorder, which they deal with through their voice: tales and allegories that investigate today’s society in an ironic manner, though without being afraid of tackling the heavy ideology.

Like plants growing in a hostile terrain, their roots burrow deep down towards an uncertain source of nutrition, and they proliferate in the depths, beyond naked social distress. They are flowers born from chaos, drunk with the energy that surrounds them, but also fatigued by the continuous and incessant process of urban modernization. In their search for an identity they are forced to elude the oppression that has so harshly tested their very creative survival.

Multimedia experimentation is becoming increasingly popular thanks to the development of new technologies and their resultant easy access, diffusion, and fruition; but this is not the only reason for such a success. Chinese video art emerged and developed only because of certain subtle social and cultural dynamics related to a particular autochthonic context. Digital technology has powered this trend by definitively breaking down the barriers between the media, in particular when they cohabit in the same digital sphere, as often happens with animation. Here the traditional visual arts that are the starting point for actions unite with interpretations articulated as a result the use of technology.

“Animation in itself is not important: animation is always incomplete. Only by trying to break down the limits inherent in other means can we arrive at the most precious aspects of animation”. (Sun Xun)