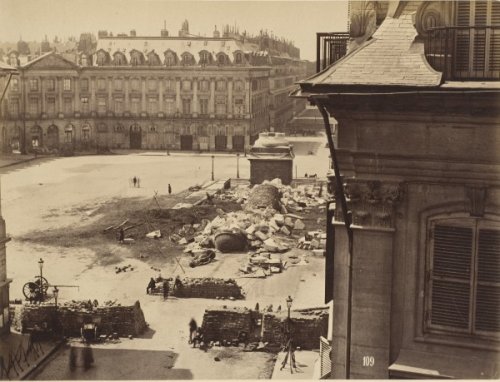 [ad#lb]
During the reign of Emperor Napoleon III, the narrow streets and medieval buildings of Paris gave way to the broad boulevards and grand public works that still define the urban landscape of the French capital. Napoleon III and Paris, on view at The Metropolitan Museum of Art from June 9 through September 7, 2009, portrays the quickly changing cityscape of Second Empire Paris through a presentation of approximately 35 photographs and 10 works in other media, all drawn from the permanent collection.
Spanning the period from 1851 to 1871, the installation begins with a photographic introduction to Napoleon III and his family, then traces the radical transformation of the city under the emperor and his master urban planner Baron Haussmann, and concludes with depictions of the ruins of Paris in the aftermath of the Commune. Many of the works in the installation are by the preeminent photographers of the period, including
Gustave Le Gray, Charles Marville, Edouard Baldus, Louis-Émile Durandelle, Alphonse Liébert, and Pierre-Ambrose Richebourg.

The exhibition is made possible by The Hite Foundation in memory of Sybil E. Hite.

“The period in which modern Paris took shape—the 1850s and 1860s—coincides with the high point of French photography,” noted Malcolm Daniel, Curator in Charge of the Department of Photographs. “Many of the period’s greatest photographers found their most compelling subject matter literally at their doorstep in the dramatic transformation of Paris.”

The Imperial Family
The exhibition begins with an introduction to the Imperial family. Nephew of Napoleon I, Louis-Napoleon Bonaparte was elected president of the French Second Republic after the Revolution of 1848 and the abdication of King Louis-Philippe. In 1851, Louis-Napoleon staged a coup d’état and seized dictatorial powers; one year later, he dissolved the Republic and established the Second Empire, taking the title Emperor Napoleon III.

This first section of the exhibition includes portraits of Louis-Napoleon in 1852 and Empress Eugénie in 1855 by Gustave Le Gray—the central figure in French photography of the 1850s—and a touching and unique portrait of the empress and her six-year-old son by Benjamin Delessert from 1862. A sculpted bust of the emperor by Jean-Baptiste Carpeaux and a painting of the empress by Franz Xaver Winterhalter, also from the
collection, are featured as well.

Napoleon III’s ascension to power paralleled a dramatic flourishing of photography in France: the rise of paper photography over daguerreotypy; the development of new processes, including glass negatives; and the establishment of photographic societies, publications, and annual salons. Photographers also enjoyed direct encouragement from the emperor and his government in the form of commissions to record historic
architecture and new construction, appointments as “official photographer” for the City of Paris or for specific public works, and purchases of photographs for imperial residences and municipal libraries.

Old Paris
Under Napoleon III and his prefect of the Seine, Baron Haussmann, Paris took the shape that is so familiar to us today. The grands boulevards, the limestone apartment buildings, and the public parks that form our image of Paris are largely the result of Napoleon III’s rebuilding of the capital in the 1850s and 1860s. The modern city came at a cost, however; historic buildings and whole neighborhoods were razed to make way for broad thoroughfares and grand public works. This profound transformation of the landscape of Paris provided subject matter for many of the period’s greatest photographers. Key among them was Charles Marville, official photographer to the City of Paris, who was commissioned to record the older areas of the capital that were slated for demolition.
These photographs of a Paris that has long since disappeared are accompanied by contemporaneous etchings by Charles Meryon and Maxime Lalanne.

Napoleon III’s Modern Paris
Although designed in part to ease military movement through the city and to prevent revolutionaries from barricading narrow streets, Napoleon III’s urban plan was also geared toward making Paris a safer, healthier, and more modern city through the construction of new boulevards, bridges, hospitals, parks, waterworks, and sewers, and the installation of thousands of gas street lamps.

The desire of a ruler to leave his mark on the city played a role as well. The grandest of Napoleon III’s building projects was the “New Louvre,” designed to connect the Louvre and Tuileries Palaces. Edouard Baldus, the official photographer for the project, made thousands of photographs on site, ranging from documentation of every piece of ornamentation to large-format photographs of the completed pavilions. Assembled into lavish albums, Baldus’s photographs of the project were presented by the emperor to the
reigning sovereigns of Europe. This section of the installation also includes Louis-Émile Durandelle’s photographs of the Paris Opera (1858–1875); views of the restoration of Notre Dame and the Tour Saint-Jacques; and images of industrial progress.

The Ruins of Paris
The Second Empire collapsed in 1870, after Napoleon III and his army suffered a swift defeat in the Franco-Prussian War. From March to May 1871 the Paris Commune, a newly established left-wing local government, battled National forces for control of the capital. A rare photograph by Pierre-Ambroise Richebourg in the exhibition shows a spy’s-eye view of barricades erected in the streets of Paris during the Commune. However, the majority of the photographs in this section—by Alphonse Liebert, Charles Soulier, Franck, and others—depict the ruins of Paris in the months after the defeat of the Commune. Along with the destruction wrought by the battling forces in the environs of Paris, the capital itself suffered from self-inflicted wounds as Communards set fire to the Paris City Hall and the Tuileries Palace, among many other government buildings, and, in an act of anti-Bonapartist symbolism, pulled down the Vendôme Column with its crowning statue of the first Emperor Napoleon.

Napoleon III and Paris is organized by Malcolm Daniel.

Learning By Doing Gotthard Schuh – A Kind of Infatuation