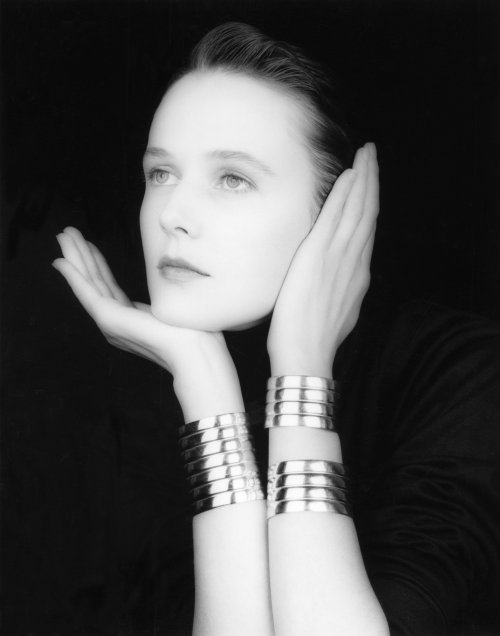 On Tuesday 23 March the Fondazione Marconi presents the exhibition entitled “Man Ray–Mapplethorpe”, realized in tandem with the exhibition “Robert Mapplethorpe. The Perfection of Form” (running 12 March to 13 June 2010), organized by the Museo d’Arte in Lugano (Switzerland), and curated by Bruno Corà, in collaboration with the Mapplethorpe Foundation of New York. The exhibition offers an opportunity to discover analogies and divergences between the works and the distinct “points of view” of these two multifaceted American artists, who, although of different generations, share a masterly ability to fathom and reveal the inner form and beauty of their chosen subjects, be they flowers, assorted objects, or male and female nudes. In Paris in 1920 Man Ray began working as a photographer for the art world, and in time became a contributor to Harper’s Bazar, Vogue, Vu, and Vanity Fair, among others. Known principally for his portraits, Man Ray was already recognized as an artist of photography thanks to his rayographs and solarization techniques. His assistant Lucien Treillard said at the time: “Man Ray a photographer? No, he used photography just as he did other means of expression, like gouache, or oil-painting. He created works of art using the photographic medium. Man Ray can rightly claim the title of artist. Of course, he has also done shoots for fashion and the occasional contract work, but thanks to him those photographs often became works of art.” Like his predecessor, during his brief career Mapplethorpe first explored the medium of painting, before passing on to photography, through which he probed and exalted the beauty and sensuality of form, achieving a reciprocal balance between black and white, angular or smooth lines, classical and contemporary. In an interview with Janet Kardon in 1988, Mapplethorpe admitted that, although someone browsing through some of his works might well discern resemblances with those of other photographers, he hoped nonetheless these influences would not seem too strong. Actually Mapplethorpe drew inspiration from many modern and contemporary artists, notably Man Ray, whom he considered the most significant photographer that had ever existed. For this occasion, on the first and second floors of the Fondazione Marconi we have arranged a series of photographs, paintings, and objects created by Man Ray from the early 1920s to the early 1970s, together with works by Robert Mapplethorpe dating from 1975 to 1986. Among these is one of numerous portraits taken in the 1980s of the artist’s muse and collaborator, the athlete Lisa Lyon, set alongside Man Ray’s Woman in Bondage (1928/29); Mapplethorpe’s iconic Calla Lily series [quanti sono nel presente caso?] (1983) and those made by Man Ray in 1931 using the technique of solarization; the nude composition Ken, Lydia, Tyler (1985) set alongside Man Ray’s assemblage of objects, Target (1933), which juxtaposes classical art with geometrical figures; the portrait of Jennifer Jakobson from 1981, compared with Man Ray’s Chevelure of 1929. The exhibition is accompanied by a bilingual catalogue (Italian/English), with texts by Bruno Corà, published by the Fondazione Marconi.

Man Ray (Emmanuel Radnitzky) was born in 1890 in Philadelphia, into a family of Russian-Jewish immigrants. The family moved to Brooklyn, where after high school and a first course in draftsmanship, he attended the Ferrer Center, and came into contact with Alfred Stieglitz and the avant-garde circles of New York. After some early paintings in the Cubist style he began experimenting with various media – collage, sculpture and assemblages, painting and air-brush techniques – while also making his first forays into photography. Together with Marcel Duchamp, he was a leading exponent of New York Dadaism, and launched several initiatives, including the Society of Independent Artists (1916), the Société Anonyme, Inc. (1920), and the review New York Dada (1921). During this period he produced his first “objects of affection”, including the famous Enigma of Isidore Ducasse. In 1921 he moved to Paris, where he met up again with Marcel Duchamp, and that same year he held a one-man show in the Librairie Six. He made his first “rayographs”, which he published in the book Champs délicieux (1922) with a foreword by Tristan Tzara. After taking part at the Salon Dada, held in 1922 at the Galerie Montaigne, he made the film Retour à la Raison, and drew close to the Surrealist group, with whom he exhibited at the Galerie Pierre in 1925, and in all successive shows they held. In Paris he was considered one of the finest exponents of Surrealism, producing paintings, assemblages, auteur films, and photographic experiments, continuing to exhibit both in Europe and in the United States. During a visit to America, he met Juliet and married her; here he mostly focused on his painting, realizing the series Equations shakesperiennes and Alphabet for Adults. When he returned to Paris he continued experimenting with photography, painting, and “objects of affection”. In 1959 the Institute of Contemporary Art in London mounted a large anthological exhibition of his work, and two years later he was awarded the Gold Medal for photography at the Venice Biennale. In 1966 his first major retrospective was held at the County Museum of Art in Los Angeles. In 1970 a large retrospective traveled to various cities across Europe, starting at the Museum Boymans van Beuningen in Rotterdam, and in 1975 he took part once more at the Venice Biennale. Man Ray died in Paris on 18 November 1976.

Robert Mapplethorpe was born in 1946 in Floral Park, Queens. He earned his BFA at Pratt Institute in nearby Brooklyn, where he concentrated on drawing, painting and sculpture. Influenced by the work of artists such as Joseph Cornell and Marcel Duchamp, he also experimented with mixed-media collages in a broad range of materials, including found photographs. After acquiring a Polaroid camera in 1970, he began taking his own, saying “it felt more honest.” That same year he moved into the Chelsea Hotel with Patti Smith, whom he had met in 1967. Mapplethorpe’s first solo gallery exhibition, “Polaroids,” took place at the Light Gallery in New York City in 1973. He acquired a Hasselblad large format camera in 1976 and began shooting his circle of friends and acquaintances – artists, musicians, socialites, pornographic film stars, and members of the S & M underground. He also took on commercial projects, creating album cover art for Patti Smith and Television, and taking photographs for Interview Magazine. In the late 1970s his photography career continued to flourish. In 1977 he participated in Documenta 6 in Kassel, West Germany, and in 1978 the Robert Miller Gallery in New York City became his exclusive dealer. In 1980 Mapplethorpe met Lisa Lyon, the first World Women’s Bodybuilding Champion. Over the next several years, they collaborated on a series of portraits and figure studies, a film, and the book, Lady, Lisa Lyon. Throughout the 1980s Mapplethorpe created works that both challenged and adhered to expectations of classical formal beauty. In black and white silver gelatin prints, he created stylized compositions with statuesque male and female nudes, delicate flower still-lifes, and studio portraits of artists and celebrities. He introduced new techniques and formats to his oeuvre: color Polaroids, photogravure, platinum prints on paper and linen, Cibachromes, and dye-transfer prints. In 1986 he designed sets for Lucinda Childs’ dance performance, “Portraits in Reflection”, created a photogravure series for Arthur Rimbaud’s A Season in Hell. That same year he was diagnosed with AIDS. The Whitney Museum of American Art mounted his first retrospective at a major American museum in 1988, one year before his death in 1989. His vast body of work has firmly established him as one of the most important artists of the twentieth century. Today Mapplethorpe’s work can be found in the collections of major museums around the world. Beyond the art-historical significance of his photographs, his legacy lives on through the work of the Robert Mapplethorpe Foundation. In 1988 he established the Foundation to promote photography, support museums that exhibit photographic art, and to fund medical research in the fight against AIDS and HIV-related infections.

Women Only: Folk Art by Female Hands Utopia Matters. From Brotherhoods to Bauhaus