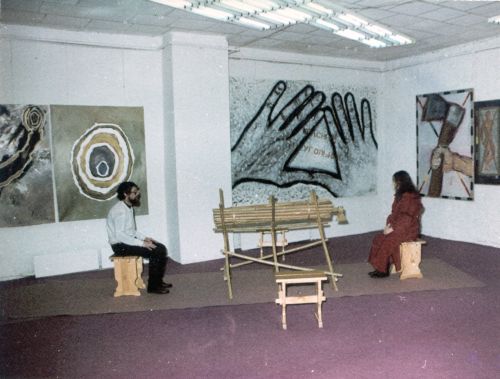 The exhibition of Natalia Abalakova and Anatoly Zhigalov at the Moscow Museum of Modern Art embraces the work of several decades. This is a kind of total project with the conceptual approach perceived and employed as a technology of contemporary art. The same one the inventors of TOTART have employed while working on their major oeuvre – The Research on the Essence of Art in the Context of Life and Art. Their primary goal is to reveal the contemporary art mechanisms in the changing reality. In a word, it features the criticism of art by means of art itself.

The idea of an Art Project as a kind of Total Art Action (TOTART) combining the creative efforts of two artists – a man and a woman – had emerged over late 1970s, and the authors’ individual oeuvre from 1960s-1970s was seamlessly integrated into this Project to carry on its existence as its part.

Painting, drawing, art project, performance documentation, installation, cinema, video art, text and sound art come together to form a performative installation covering the space of the four-floor exhibition venue of the Moscow Museum of Modern Art. The project unfolds as a hypertext of a sort, with artworks as such creating an interactive environment constructed around the principal axes of the Project: the Russian Avant-garde; the East – West dialogue; gender; nature and culture; word and image.

The display includes several sections: the Zero Degree of Art, the Golden Law, the Journey to the End of D., and the Smile of Buddha. The exhibition space has been organised as a complex dynamic temporal model, which allows the viewer to advance spirally and see all these motifs elaborated.

Painting as such is conceived as an ideographic sign, a modality of conceptual project. It may be described as Painting After the End of Painting, and the vitality of the very pictorial language is to be tested.
So ensues the extended semantic structure – Classical Totart Object – having some faint totalitarian whiff to it and revealing the polyvalence of this image, extremely explicit and at the same time immensely generalized.

The Metaphoric visions of the Modern Age are not bound to express the idea of progress seen as a linear historical development, as was the custom in the 19th and early 20th century. They may take quite the opposite meaning, alluding to the capriciousness and fatality of human fate, to the increasing estrangement of most people from personal participation in their own history. When expressed in art forms, all these intuitions crystallize in an effort to create the comprehensive total space of total presence (or absence) in the context of total challenge. The spectator is invited to travel in the company of the project creators and reach the territory where many clues, origins, meanings and, above all, inescapable questions dwell.