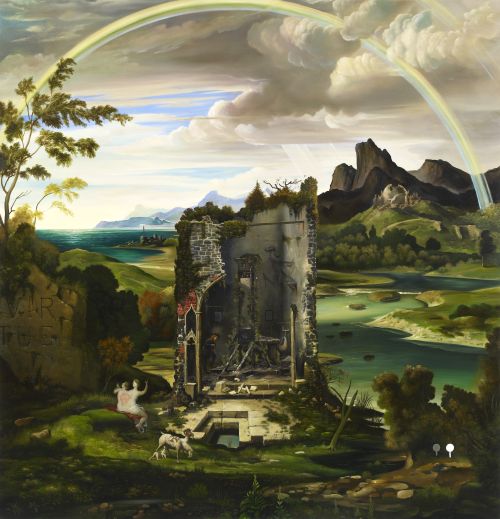 The Modern Art Museum of Fort Worth presents the third FOCUS exhibition of the season, FOCUS: Ged Quinn, organized by Curator Andrea Karnes. Ged Quinn’s paintings combine landscapes in the vein of Claude Lorrain, Jacob van Ruisdael, and Asher B. Durand, with incongruent and often dark fragments of history, mythology, and the artist’s imagination. His panoramic paintings initially seem familiar to most viewers, even identifiable, largely because they are based on well-known works from the past. Quinn, however, quickly departs from his source material, increasing the scale and adding new elements, using the original work as a springboard. “My aim is merely to give a visual impression of the painterly language [of Claude Lorrain, for example] as shorthand for something else,” Quinn explains. “I look at the original artistic statement or conceptual quality to find a space to develop my own ideas further.”

Quinn’s works are both strange and awe-inspiring in their combination of painterly skills and provocative conceptual strains. Unpacking his narratives is always tempting, but finding a clear storyline is ultimately denied, in that each work contains numerous nonlinear references. “There are circulations, juxtapositions, and layering that allow space for narratives both to develop and disappear,” Quinn has said, “there is always play between the signifiers that allow for the satisfaction of readings, but at the same time, they undercut the somewhat false satisfaction of ‘explanation’.” In Quinn’s work, sublime backgrounds frequently meet dilapidated foregrounds, and at all turns utopian ideals are acknowledged and critiqued.