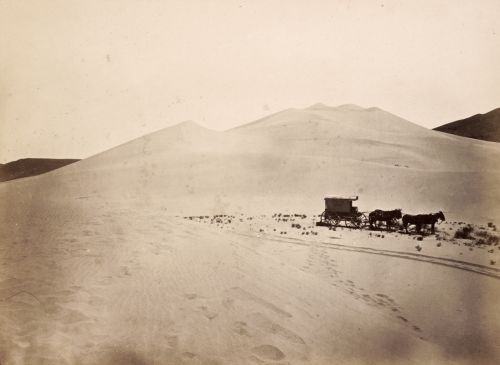 The photographs made by Timothy H. O’Sullivan as part of the United States Geological Exploration of the Fortieth Parallel, or King Survey, comprise an iconic and richly varied body of work.

The first of the great post-Civil War Western expeditions, the King Survey was organized under the authority of the U.S. Army Topographical Engineers. Between 1867 and 1872, Clarence King, the geologist in charge, and his party studied a vast swath of terrain, approximately 100 by 800 miles, encompassing the path of the soon-to-be-completed transcontinental railroad, from the border of California eastward to Cheyenne, Wyoming.

The survey’s official photographer, Timothy H. O’Sullivan, was talented, resourceful and imaginative. In four seasons with King’s group—1867, 1869 and 1872—he created a diverse body of photographs: geological studies, landscapes, views of miners and mining operations, records of cities and settlements, studies of the survey itself and self-reflexive meditations on his own presence in the West.

Of all the photographers who accompanied the Western surveys of this era, O’Sullivan remains the most admired, studied and debated. This is a result of the distinctly individual quality of his seeing—his particular union of fact and point of view; his understanding of what it meant to make a documentary photograph. O’Sullivan’s work remains inspiring and instructive: the clues it holds—to the nature of photography, 19th-century visual culture and the construction of photographic history—challenge and enlarge each new generation of viewers.