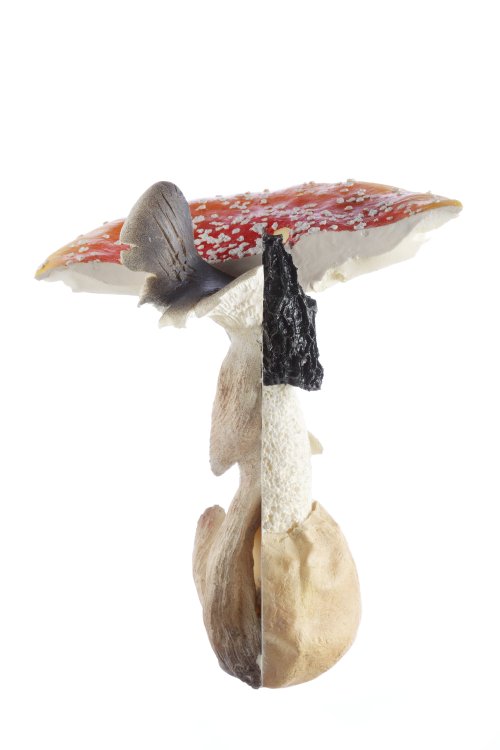 Museum Boijmans Van Beuningen will shortly stage Carsten Höller’s exhibition Divided Divided. The contemporary artist is creating a 1,500 m2 installation especially for the museum. What’s more, visitors can spend the night in the Revolving Hotel Room. All the works on show are based on a simple mathematical formula that divides and re-divides the space and the objects into two.

Carsten Höller is presenting a new series of huge complex mushroom replicas (Triple Giant Mushrooms, 2009-2010). He has made a floating room from aluminium (Swinging Spiral 2010), and hanging from the ceiling is an enormous mobile composed of seven birdcages (Singing Canaries Mobile, 2009), complete with live singing canaries. There are also two video installations from the Flicker Films series (2005), in which flickering
images of performances by African dance groups are projected. A new wall installation of painted ‘Nymphenburg’ porcelain plates (Flying City Tableware, 2010) is being shown alongside these works. Visitors can set these plates in motion by cranking a handle. The exhibition also features a recent series of paintings and an abstract mural.

Revolving Hotel Room
Carsten Höller has fitted out a hotel room in the adjoining gallery in Museum Boijmans Van Beuningen. The Revolving Hotel Room is a complete hotel room, including a bedside table and mini-bar, mounted on four revolving discs. While the exhibition is running visitors will be able to book into this exclusive room with its constantly changing view. Guests in the Revolving Hotel Room have twenty-four-hour access to the entire
museum. This hotel room was shown previously in the Guggenheim Museum in New York with great success.

‘Divided’ Approach
All the works and the floor plan of the exhibition are constructed to a formula that divides what has already been divided. It varies from a simple division into two to a complex spiral formula which is the basis of the Swinging Spiral. Carsten Höller is fascinated by the concept of ‘divided’. In his exhibition One Day One Day in Färgfabriken in Stockholm (2003), for example, two different works were shown on random days without the public knowing. In association with the Fondazione Prada in London he opened the now famous Double Club (2008-09)—a bar, restaurant and discotheque. Sections from the ‘Congolese’ and ‘Western’ interiors, music and dining were divided in the same way in this club.

Oeuvre
Höller’s work has been exhibited internationally for the last twenty years, including solo shows in the Fondazione Prada, Milan (2000), the Massachusetts Museum of Contemporary Art (2006) and the Kunsthaus in Bregenz, Austria (2008). In 2002 Carsten Höller exhibited Light Corner in Museum Boijmans Van Beuningen. In 2006 he produced Test Site (a set of slides) for The Unilever Series in Tate Modern in London and he
represented Sweden at the 51st Venice Biennale in 2005. Carsten Höller lives and works in Stockholm.

Publication
Publishers Hatje Cantz (Berlin) are bringing out an extensive overview of Carsten Höller’s work in the spring of 2010. The exhibition Divided Divided in Museum Boijmans Van Beuningen is part of it. This lavishly illustrated publication will be available in the museum shop while the exhibition is running.

The exhibition is part of the official programme of Holland Art Cities 2009-2010 and has been made possible in part by the Goethe Institute Rotterdam, the Institut für Auslandsbeziehungen e.V. (ifa), Bilderberg Parkhotel Rotterdam and Sikkens.

The Peggy Guggenheim Collection closes 2009 with over 360,000 visitors The Subversion of Images – Surrealism, Photography, Film