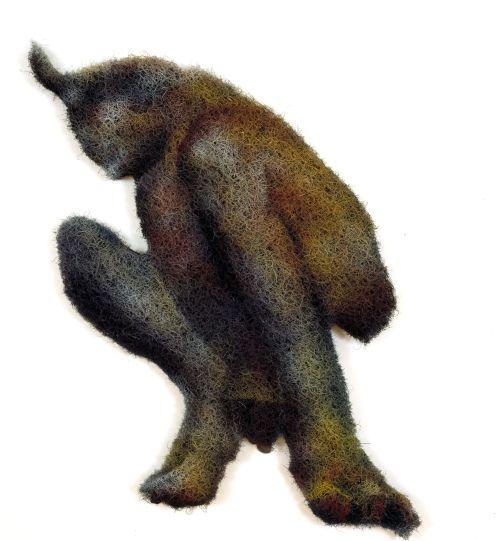 The Contemporary Art Museum St. Louis is proud to present an exhibition of works by the widely acclaimed American artist Richard Artschwager, in the first focused look at the artist’s exploration of rubberized horsehair.

A maverick who began his career as a cabinet-maker, Artschwager has influenced countless other artists with a wide-ranging body of work that includes sculptures, paintings, prints, photographs, installations, drawings, and furniture pieces that merge the machine-made with the hand-made.

Over the past four decades, Artschwager’s work has been variously described as Pop Art, because of its derivation from utilitarian objects and incorporation of commercial and industrial materials; as Minimal Art, because of its geometric forms and solid presence; and as Conceptual Art, because of its cool and cerebral detachment. But none of these classifications adequately define the aims of an artist who specializes in the relationship between perception and deception.

Artschwager’s exhibition at the Contemporary focuses on a material he has used throughout his career: rubberized horsehair. Emerging from the artist’s famous blps series he began in 1968, the hair works depart from the crisp lines and sharp forms of his better-known Formica furniture works, and blur the clarity of sculptural form, throwing objecthood out of focus. As the artist puts it, “Hair is peculiar. It’s foreign to gravity yet at the same time it has stability. You can cut it and it has built-in contrary qualities, which are structure and chaos.”

Used most commonly in upholstery, rubberized horsehair is usually hidden from view underneath the rounded edges of chairs and couches. In these works, Artschwager turns the objects inside out, exposing their innards and applying them to new surfaces. The artist has long been interested in what he calls object-pictures, collapsing the flatness of an image with the tactility of an object, or, in his own words, “sculpture for the eye and painting for the touch.” Installed in the Contemporary’s central main gallery, silhouettes of life-size human figures seem to dance and float weightlessly on the wall. Often beginning as small scribbles in
the artist’s notebook, the organic forms are enlarged to life-size and made with actual horsehair, allowing their sketch-like quality to outlast their entrance into the world of objects. As illusions, the images confuse the real with the artificial, and while his figures dance, climb, dive, and rejoice as “living” characters, their materials prevent the image from staying within our reach. Also included in the exhibition are images that have made up Artschwager’s iconography for over forty years: hair-covered blps, exclamation marks, corners, and hair-covered furniture pieces each become sculptures that are slightly out of focus. In contrast to a contemporary art conversation weighed down by irony, strategy, and cool self-reflexivity, Artschwager’s new exhibition at the Contemporary foregrounds the artist’s sincere celebration of the experiential knowledge of objects and pictures and his patient passion for locating the body and soul of an image.

Richard Artschwager was born in 1923 in Washington D.C and currently lives and works in Hudson, NY. He first studied chemistry, biology, and mathematics at Cornell University. In the early 1950s, he became involved in cabinet-making, producing simple pieces of furniture. His work has been the subject of many important surveys, including the Whitney Museum of American Art, New York; Centre Pompidou, Paris; Deutsche Guggenheim, Berlin; and Kunstmuseum Winterthur and is included in many museum collections worldwide, including the Museum of Modern Art, New York; the Art Institute of Chicago, Museum Ludwig Cologne, and Fondation Cartier, Paris.