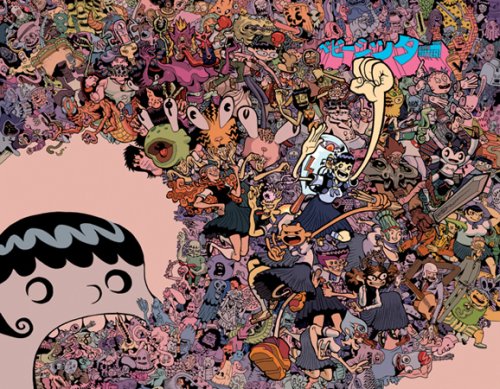 Andy Ristaino is a cartoonist and animator currently residing in the San Francisco. Originally from Franklin, Massachusetts, he has been drawing comics ever since he could. His first published work, a comic strip based on Greek myths entitled Myth Conceptions, appeared in The Pompeiiana Newsletter when he was in high school between 1992 and 1994. He attended the Rhode Island School of Design majoring in illustration/animation, during which time he self published two issues of his martial arts comedy zine Nightblade The Nearsighted Ninja, and drew a back up story featuring the character Dangerman, in Oz Squad from Patchwork Press.

Ristaino’s first solo book Life of a Fetus, a story about a bored baby who decides to jump out of the womb early and go on a road trip, was published by SLG comics in 1999 and ran for seven issues. This was soon followed by the spin off series The Babysitter, A send-up of Japanese pop culture. All three issue of The Babysitter have recently been collected by SLG comics. Ristaino’s work tends to focus on themes of the strangeness of life and the fragility of the human psyche, claustrophobia, and the odd space between understanding and incoherence. He looks at storytelling as something liquid.

His work has appeared in numerous comic anthologies such as Meathaus S.O.S., Spectrum 16, Tales of Hot Rod Horror, Spark Generators 2, Pet Noir, Go for the Gold, and the soon to be published Popgun vol. 4 from Image comics. His children’s comic the Uncredibly Confabulated Tales of Lucinda Ziggles was a regular fixture in the now defunct Nickelodeon Magazine.

Ristaino anticipates the publishing of his next SLG graphic novel Escape from Dullsville, a 288 page collection of Life of a Fetus with over 80 pages of unpublished material, sometime in 2010.

Matisse: Radical Invention, 1913-1917 What happens next is a secret