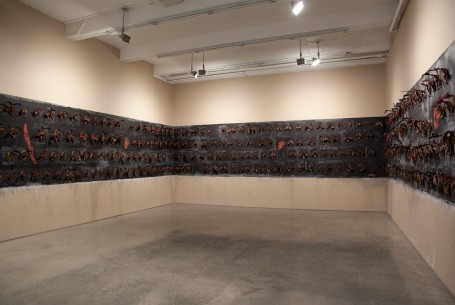 Wangechi Mutu’s work reflects her very original thinking on the state of the world and the relative hegemony of Western civilization. In her drawings and collages, as well as her sculptures, assemblages and videos, she conjures up the interplay of relationships between living organisms, humans and the power of nature. Highly regarded as a multidisciplinary artist, Mutu has exhibited regularly since the late 1990s. She has developed a spectacular, politically and socially engaged body of work revolving mainly around the representation of women, matters of identity and the African diaspora. This monographic exhibition includes the remarkable installation Moth Girls, 2010, recently acquired by the Musée. The masterly piece comprises hundreds of ceramic figurines with leather wings and feather antennae. Pinned to the walls in rows, these part-human, part-animal figures form a monumental, strikingly beautiful bestiary on a formidable scale and with a recurring, and disturbing, hybrid female image.
Wangechi Mutu was born in Nairobi, Kenya, in 1972. She studied at the Yale University School of Arts, Cooper Union for the Advancement of Science and Art, where she pursued her interest in anthropology, and United World College of the Atlantic. She lives and works in New York.