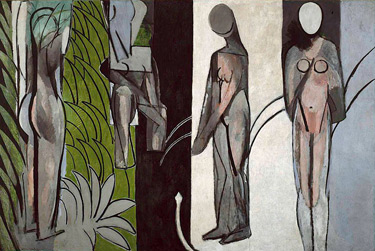 The Art Institute of Chicago and The Museum of Modern Art, New York (MoMA) have co-organized an ambitious exhibition that presents, for the first time, a seminal investigation of a pivotal point in the career of Henri Matisse (1869-1954), one of the 20th century’s greatest artists. Matisse: Radical Invention, 1913-1917 will premiere at the Art Institute March 20 through June 20, 2010, and then travel to MoMA, where it will be on view from July 18 through October 11, 2010. Nearly 120 of the artist’s paintings, sculptures, drawings, and prints from this five-year period will be presented, including the masterpieces Bathers by a River (1909-10, 1913, 1916-17) and The Moroccans (1915-16). This is the first exhibition devoted solely to the work of this important period in Matisse’s career, thoroughly exploring his early working process as well as his revolutionary experimentation, or what he called his “methods of modern construction.”

Matisse: Radical Invention, 1913-1917 examines the period of Matisse’s production from his return to Paris from Morocco in 1913 to his departure for Nice in 1917. Though this period spans only five years, it represents a major turning point in Matisse’s career, the years when he developed his most demanding, experimental, and enigmatic works: paintings that are abstracted and rigorously purged of descriptive detail, geometric and sharply composed, and dominated by the colors black and gray. Previously considered to be responses to Cubism or World War I, or simply unrelated aberrations of the artist’s development, works from this period are here reassessed and presented as one of the most significant chapters of Matisse’s evolution as an artist.

A highlight of the exhibition is the Art Institute’s monumental painting, Bathers by a River. This painting has been the subject of extensive art-historical, archival, and scientific research that unlocks Matisse’s working methods. A painting that Matisse worked on repeatedly over a period of many years, Bathers by a River provides the key to the development of the artist’s revolutionary style of this time. The subject of study for four years, Art Institute curators and conservators wedded new archival information and new imaging technologies to uncover the history of this painting’s evolution and its surprising connections with other works, most significantly The Museum of Modern Art’s The Moroccans and The Piano Lesson (1916). MoMA has likewise engaged in an investigation of works in its collection, and, through this partnership, new information about Matisse’s experimental techniques.

Building on this research, Matisse: Radical Invention, 1913-1917 showcases a wide range of Matisse’s paintings, sculptures, drawings, and prints primarily from 1913 to 1917. Visitors will be able to experience the exhibition not only through such important paintings as Interior with Goldfish Bowl (1914) and Portrait of Yvonne Landsberg (1914), but also through closer looks at the artist’s sculptures known as Back I, II, III, IV, and his innovative etchings, engravings, and monotypes–dramatic prints that the artist made only during the 1913-17 period. Also included in the exhibition is a special presentation of Matisse’s little-known Civil Prisoners of Bohain-en-Vermandois series that demonstrates how the artist attempted to unite his art, life, and wartime concerns during these years.

Matisse: Radical Invention, 1913-1917 explores the critical interplay of Matisse’s works and presents his great achievements as the product of this concentrated period of rigorous experimentation. Supplemented by graphic didactic materials and texts as well as audiovisual presentations of the conservation research involved in the project, Matisse: Radical Invention, 1913-1917 redefines our perception of this modern master and his art.

Matisse: Radical Invention, 1913-1917 is accompanied by a lavishly illustrated catalogue published by the Art Institute and distributed by Yale University Press. It will be available early April 2010.

Matisse: Radical Invention, 1913-1917 is curated by Stephanie D’Alessandro, Gary C. and Frances Comer Curator of Modern Art at the Art Institute of Chicago, and John Elderfield, Chief Curator Emeritus of Painting and Sculpture at The Museum of Modern Art, New York.