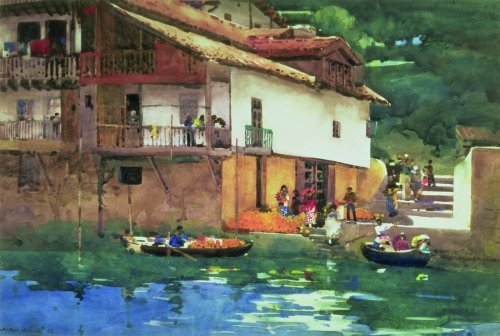 A major exhibition of works by the Glasgow Boys, the group of highly influential and internationally-renowned Scottish-based artists who on occasions enraged Victorian Britain, is to be held at The Fleming Collection, at 13 Berkeley Street, London W1 from 14 September to 18 December 2010. Most of the 50 paintings on show will come from The Fleming Collection’s own holdings but ten will be loaned by an important private collection rarely seen by the public. The Glasgow Boys from The Fleming Collection will complement Pioneering Painters: The Glasgow Boys 1880-1900, which will take place at The Royal Academy of Arts in London from 30 October 2010 to 23 January 2011 following a successful showing at Kelvingrove Art Gallery and Museum, Glasgow.

The Fleming Collection’s exhibition will demonstrate the depth of its acquisitions since it was founded as a corporate collection of Scottish art in 1968 by Flemings, the London merchant bank. This year it is celebrating the tenth anniversary of its transformation into The Fleming-Wyfold Art Foundation, a charitable foundation with a gallery open to the public in Mayfair.
During its first decade it has established itself as an embassy for Scottish art in London.

The Glasgow Boys from The Fleming Collection will show works by all the principal figures in the loosely-knit band of artists who helped revolutionise British art in the last two decades of the 19th century. They include Sir John Lavery, Sir James Guthrie, Edward Arthur Walton, Arthur Melville, David Gauld, Joseph Crawhall, Edward Atkinson Hornel, George Henry and James Paterson. The Bridge, Crowland by Guthrie is a classic example of the first phase of Glasgow School art as they turned away from traditional 19th century Scottish painting towards a bolder, broader style. The second wave of Glasgow Boys were interested in colour, pattern and texture and among them was David Gauld, whose luminously beautiful A Breton Village, painted about 1900, is included in the exhibition.

The exhibition will include ten works from a rarely-seen private collection which belongs to the descendants of Andrew and Jane Gardiner. Mrs Gardiner was Guthrie’s aunt and in the 1880s the couple’s three sons James, William and Fred were among the strongest supporters of the Glasgow Boys through both direct patronage and indirect encouragement and recommendation. James Gardiner was a constant and enthusiastic collector of works by Guthrie, Crawhall, Walton and Henry, among others. Paintings by these artists which remain in the family’s collection will be exhibited in The Glasgow Boys from The Fleming Collection.
They will include Guthrie’s Ropewalk Sketch, Crawhall’s Pigeons in a cage and Walton’s Farmsteading.

During the late 19th century Glasgow experienced a remarkable flowering in painting and became the base for the Boys. They came together in an informal group to challenge the preeminence of Edinbugh and the Royal Scottish Academy and hated the romantic landscapes and anecdotal genre paintings produced by most Victorian artists. They set out to emulate the naturalism of their French hero Jules Bastien-Lepage and liked to get out into the countryside and paint plein air. However their work stirred up controversy among the traditionalist British public. When they were invited to submit works to an exhibition in Liverpool in 1892 both press and public rounded furiously on paintings which had no obvious story to tell. The city fathers proved more far-sighted and bought pictures which hang in the Walker Art Gallery in Liverpool to this day. The Glasgow Boys’ influence helped to shape the face of art in Scotland and further afield for many years to come.