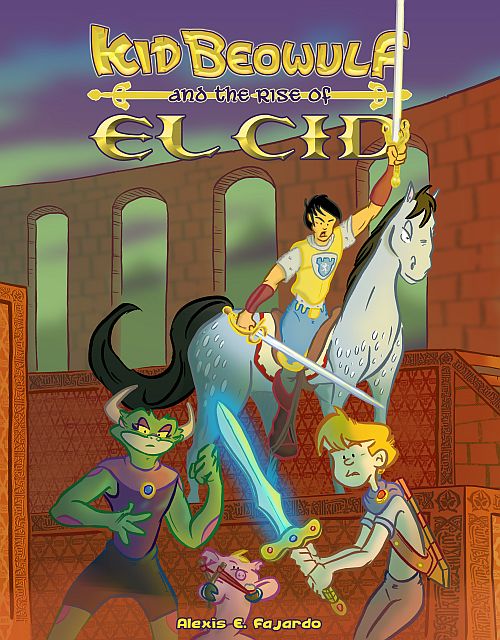 Beginning on May 4, 2013, the Cartoon Art Museum’s ongoing Small Press Spotlight will feature the art of Alexis Fajardo.

Alexis E. Fajardo is a student of the classics–whether Daffy Duck or Damocles–and has created a unique blend of the two in Kid Beowulf. Lex has taught cartooning throughout the San Francisco Bay Area and currently resides in Santa Rosa where, when not penning Kid Beowulf he works for PEANUTS at the Charles M. Schulz Studio.

Inspired by the epic poem BEOWULF, Kid Beowulf follows the adventures of 12-year-old twin brothers, Beowulf and Grendel as they travel to distant lands and meet fellow epic heroes therein. Similar to Asterix, Bone, and Usagi Yojimbo, Kid Beowulf is intended for audiences who enjoy classic cartooning mixed with high adventure. Kid Beowulf originally started as a seven-page zine in 2000 and eventually grew to a 200 page, self-published graphic novel in 2004. Lex continued to self publish Kid Beowulf until 2008 when Portland based publisher Bowler Hat Comics relaunched the series with Kid Beowulf and the Blood-Bound Oath, which was followed in 2010 by Kid Beowulf and the Song of Roland.

The artwork for this installment of the Cartoon Art Museum’s Small Press Spotlight comes from the latest adventure, Kid Beowulf and the Rise of El Cid, which follows Beowulf and Grendel into Spain where they meet a young knight named Rodrigo who will one day become the epic hero, El Cid. Filled with action, adventure, and a little romance, Kid Beowulf and the Rise of El Cid, debuts this spring via the generous patrons of the 2012 Kid Beowulf Kickstarter. The book will be available at the Cartoon Art Museum bookstore along with the other two books in the Kid Beowulf trilogy.