Art Institute of Chicago has commissions Katharina Fritsch for a site-specific, sculptural installation

The Art Institute of Chicago has recently commissioned Katharina Fritsch for a site-specific, sculptural installation. The German artist’s curious cast of characters–oversized versions of a hand, fern fronds, an apple, an egg, a human skull, St. Michael, and a Madonna, among others–will be on display on the Bluhm Family Terrace atop the museum’s Modern Wing through October 28, 2012. These nine brightly colored sculptures, divided up into three distinct groups of works (1. Stilleben/1st Still Life, 3. Stilleben/3rd Still Life, and Apfel/Apple) , were produced between 2009 and 2012. Fritsch’s fastidiously crafted objects–rendered in bronze, copper, plastic, and epoxy–offer visitors an alternative, perhaps unsettling, view of these often iconic forms. 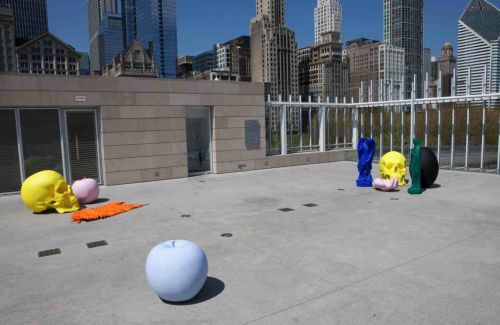 Katharina Fritsch roots her work in the personal, often drawing from childhood memories of familiar circumstances or chance encounters. Her references engage broad aspects of folklore and culture through meticulous reproductions of everyday objects, which she formally manipulates with shifts in scale and color. Made strange by repetition and siting, her sculptural installations are both seductive and disturbing. In the Proustian sense of activating memory, Fritsch’s works create an unnerving familiarity that is subsequently destabilized by the realization that we are seeing a form, a character, or an object for the very first time.

While Fritsch’s painstakingly handcrafted objects are easily mistaken for manufactured items, the artist employs a complicated and time-consuming fabrication process that begins with sketches and scale models. Molded by hand, worked and reworked, each object is subjected to multiple processes of casting or layering. The completed, yet still idiosyncratic forms are then painted in bold, highly saturated colors with matte, nonreflective surfaces, creating a sense of otherworldliness. In Fritsch’s words, “Often my sculptures have a matte surface so that there is no reflection whatsoever from the surroundings. That increases the impression of a vision that one cannot grasp.”

With this specially commissioned group of sculptures specifically for the Art Institute, Fritsch becomes the first visual artist to receive the Prince Prize for Commissioning Original Work , awarded annually by the Chicago-based Prince Charitable Trusts. It is designed to support collaborations between promising mid-career artists and world-class presenting institutions. “We are thrilled to partner with Katharina Fritsch and the Art Institute to make a bold statement of cultural and civic leadership in support of the arts,” says Benna Wilde, Managing Director of Prince Charitable Trusts. “The Wood-Prince family has a deep and generations-long association with the museum that illustrates our commitment to bringing commissioned works and permanent acquisitions to Chicago’s great cultural institutions. We are especially pleased that this outstanding installation will be showcased in one of the museum’s premier public spaces and enjoyed by art enthusiasts from Chicago and beyond.”

Born in 1956 in Essen, Germany, Fritsch trained at the Kunstakademie in Dusseldorf. She represented Germany in the 1995 Venice Biennale and has had one-person exhibitions at the Dia Center for the Arts; the Kunstmuseum, Basel; the San Francisco Museum of Modern Art; Tate Modern, London; and K21, Düsseldorf. Most recently, the Kunsthaus Zurich held a retrospective exhibition of Fritsch’s work that traveled to the Deichtorhallen Hamburg. Additionally, she was featured prominently in the 2011 Venice Biennale. Fritsch lives and works in Düsseldorf.

Katharina Fritsch is curated by James Rondeau, Frances and Thomas Dittmer Chair and Curator, Department of Contemporary Art. The exhibition is organized by the Art Institute with major funding from the Bluhm Family Endowment Fund, which supports exhibitions of modern and contemporary sculpture. This exhibition was created with funds from the Prince Prize for Commissioning Original Work, which was awarded to Katharina Fritsch and the Art Institute of Chicago in 2011. Generous support is provided by the Exhibitions Trust: Goldman Sachs, Kenneth and Anne Griffin, Thomas and Margot Pritzker, the Earl and Brenda Shapiro Foundation, Melinda and Paul Sullivan, the Trott Family Foundation, and the Woman’s Board of the Art Institute of Chicago.