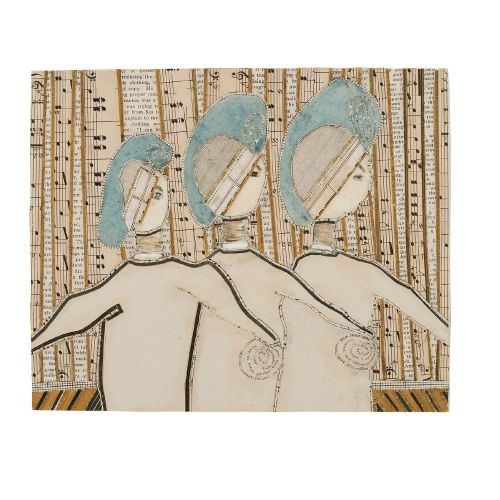 In Ann Irwin’s universe, the unexpected becomes commonplace and the commonplace is never exactly what you expect. Houses sprout heads and rays of fire. Hills bristle with stick figures. Trees grow ribs and skulls. These transformations can be both ominous and optimistic, witty and wise; they arose from a life committed to creativity and represented a daily triumph over adversity.

Transmutation and Metamorphosis: The Collages of Ann Irwin will be on view from July 9—October 16, 2011 in the James A. Michener Art Museum’s Pfundt Gallery. The exhibit is sponsored by Mary Lou and Andrew Abruzzese, The Pineville Tavern.

Ann Irwin created art under challenging circumstances: She battled chronic lung disease and other health issues. Even toward the end of her battle, she managed, with a 54-foot-long cord to her oxygen supply, to still work in her beloved garden, and create eloquent collages and quilts in her basement studio.

Born in 1942 in New York, Irwin grew up in Wyndmoor, Pennsylvania, and studied at the Boston Museum School and the Tyler School of Art. After years of travel, she settled in Bucks County where she apprenticed at the Moravian Tile Works, and began to create highly-detailed, meticulously crafted collages, using old books, fabric and found objects. Over several decades she quietly produced an extensive body of work, rich in a deeply personal mythology that featured imaginative images of birds, houses, trees and flowers. In spite of serious and ongoing health problems, she continued to visit her studio every day, making complex works that sometimes expressed her fears and troubles, but were often whimsical and light-hearted as well. Even during her final illness in 2005, when she was confined to a hospital bed for several weeks, she continued to draw and make collages until just a few days before she died.