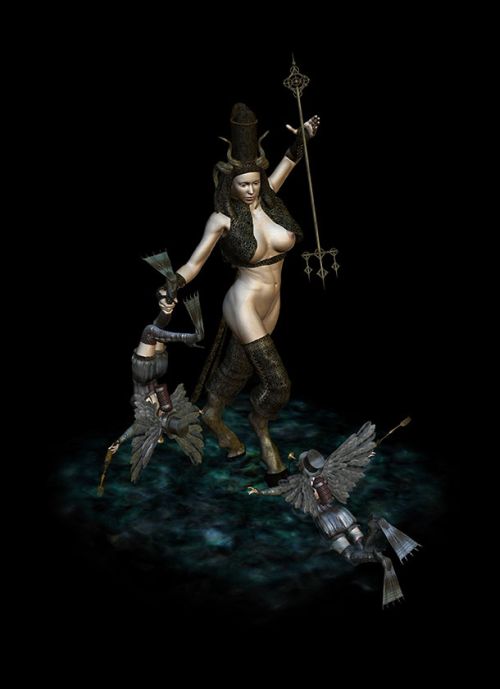 Virtual artworks, through a photographic exposure process, condense themselves on gleaming crystal sheets, becoming mirrors in which, next to our reflected image, beautiful, perfect and smooth entities of elsewhere appear. Mysterious sacred and profane female figures, madonnas and virtual porn-stars configured as icons of power and luxury, hieratic goddesses of perversion and voluptuousness; an unknown language, covered by enigmas and soaked with magic. This is AsAbaroK, Christian Zanotto’ solo show, curated by Sonia Arata, which was successfully opened on Friday the 20th April at Red Stamp Art Gallery in Amsterdam.

Christian Zanotto, originary from Vicenza, class ’72, is certainly an artist who cannot pass unnoticed: a large audience crowded the gallery to meet him, see his works and bring home the catalogue catching the opportunity to receive a signature by the artist himself. And AsAbaroK, the exhibition title, echoed like a spell or a Dadaist game that creates the sound that gives rise to an entity, in the heart of the historic center of Amsterdam, which houses the gallery. Visitors have been involved in a high level of sensoriality where the virtual tends to materialize and to occupy the realm of the concrete.

As Zanotto said in a recent interview: << I have materialized images arising from my analysis on human being, concentrating them in theatre scenes: treating the crystal sheets as black mirrors has allowed me to include the viewer and the environment yet more in the scenery, also setting in motion all the psychological mechanisms activated by mirrors >>.

The artist places in front of us puzzling entities with transgenic bodies, mistress women which embody the consciousness of a dominant female role, owners of machines
from obscure function: they influence our psyche like the images of the ancient alchemists or the Arcana of Tarot do, veiling and in the same time unveiling close and remote meanings, just as the images from dreams.

Visitors were playfully carried in this universe, which enchants, surprises, mesmerizes and at the same time repels. A universe which is able to defile itself with the art history of the past and to feed our obsession for beauty. The public, accomplice in the artist’s journey through imagination, has given himself to suggestions in balance between reality and fantasy, revealing the ambivalent nature of experiencing the contemporaneity, where physical and virtual borders seem to become increasingly less distinguishable.

While we’re still a little dazed by the appearance of these Valkyries of luxury emanating a mysterious hypnotic force, a question still remains: is the real world to dominate on the fantastic dimension of technology or are the tools of new media to give us a redefinition of reality, through a daily and indiscreet naturalness?

Christian Zanotto says: “ Their appearance carries with itself a revealing message, which shakes us through a shiver, an electric contact (“divine spark”, they would have said), to lead us to explore, understand and disentangle on a deeper level the dark side of our conscience, the most unknown. Here, beyond the fear, the enormous and true strength of the feminine, unquenchable and always actual, is hidden. We can make it relive in its whole splendor.”