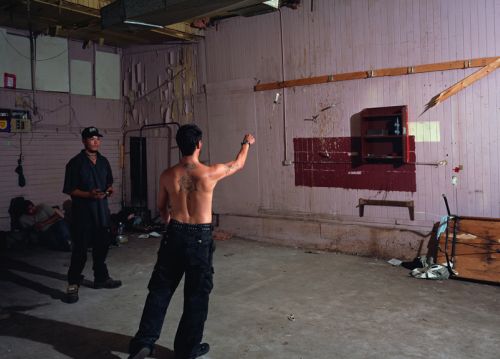 Jeff Wall is recognised throughout the world as one of the most innovative and influential artists working today. JEFF WALL Photographs, this first Australian survey of his work brings together twenty-six mostly large-scale photographs to present an overview of his extraordinary achievements and features major works from over three decades of artistic and photographic innovation. Large and luminous, his photographs have rewritten nearly every convention of photography. Wall’s outstanding body of work has played a decisive role in establishing photography as the major contemporary art form it is today.

The Director of the Art Gallery of Western Australia, Stefano Carboni, said; “JEFF WALL Photographs is an exceptional event on the Australian art calendar for 2012-13. It presents for the first time a significant number of the artist’s most important works. The Gallery is proud to have organised this exhibition in association with the National Gallery of Victoria, and looks forward to seeing it presented in Perth, Melbourne and Sydney.”

Jeff Wall’s approach to photography is diverse, ranging from photographs presented as illuminated colour transparencies in light boxes, black and white prints, colour prints to intimate small-scale photographic observations. JEFF WALL Photographs presents key iconic works including: The Destroyed Room 1978, A sudden gust of wind (After Hokasai) 1993, After ‘Invisible Man’ by Ralph Ellison, the Prologue 1999-2000, Night 2001 and his most recent works such as Knife throw 2008 and Boy falls from tree 2010.

The large-scale works in JEFF WALL Photographs, measuring over 2 by 3 metres, are testaments to the ambitions Wall has for photography. Their size, intensity and quality attract undivided attention.
Each offers the chance to revel in an imaginative ‘near documentary’ photographic moment.

JEFF WALL Photographs is a rare opportunity to see these remarkable works that changed the trajectories for contemporary art. His photographs will enthral with their lavish beauty, keep you looking with pure visual pleasure and repay your attention with refreshed perceptions as the so often invisible in our everyday world is made visible.