Vladislav Mamyshev-Monroe (1969–2013), the man of a thousand faces, was a central figure in the generation of artists who came to prominence in Leningrad in the 1980s. His unique talent was the ability to take on different roles, to be both funny and serious at the same time. 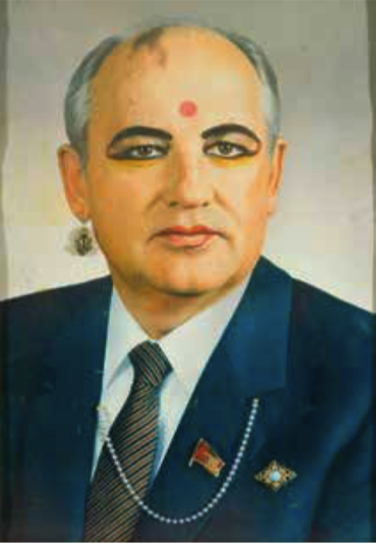 Mamyshev-Monroe became known for photographs, videos and performances in which he took on the guise of historical persons and of the heroes of movies and legends. His name is borrowed from his idol, Marilyn Monroe.
Russian Stardust at the Museum of Contemporary Art Kiasma showcases a number of iconic images and videos by Mamyshev-Monroe from the 1990s and 2000s. In addition to Marilyn, the star-studded cast features Dracula, the Pope, Elizabeth Taylor and Jesus.
Alongside the parade of stars and historical icons, Mamyshev-Monroe’s work also includes a political streak. Among his standard topics are Soviet and Russian rulers and bureaucrats. His works cover the optimism awakened by Gorbachev’s reforms (perestroika), the collapse of Soviet Union and critical stances towards Russia in the 2000s.
Mamyshev-Monroe’s many roles in his work included such notable figures as Lenin, Gorbachev and even Vladimir Putin. Indeed, it was his boldness and originality that set him apart from his Russian contemporaries. The message of his art with its strong emphasis on individuality and expressive freedom remains topical to this today.
Mamyshev-Monroe was the linchpin of most of his works. He drew, photographed and made collages, and performed with a band named Popular Mechanics. With his comrades he founded a media art project entitled Pirate TV that parodied official Soviet television programming and broadcast news of art life in Leningrad. Mamyshev-Monroe was one of the first drag artists in Soviet Union.
Mamyshev-Monroe died in 2013 in Bali, Indonesia, where he used to stay for extended periods of time in the 2000s. He was found drowned in his pool at the age of just 43.
The exhibition at Kiasma is Mamyshev-Monroe’s first solo show in Finland. In his lifetime, he participated in a few group exhibitions and performance events in Finland.