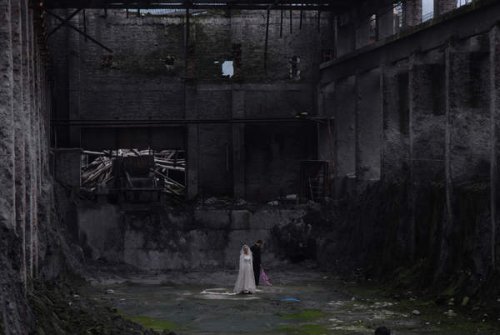 [ad#lb]
Chen Qiulin documents the rapid and tumultuous urbanization of Sichuan, her home province in southwestern China. From the chaotic dismantling of cities for the construction of the Three Gorges Dam, to the effects of modernization on the younger generations, and the devastation of the 2008 Wenchuan earthquake, Chen explores the birth of a new China with stark reality and poetic beauty. When her hometown of Wanxian –a river town bordering both sides of the Yangzi River in Sichuan- was destined to be submerged by the raising water level of the Three Gorges Dam Project, Qiulin she set out to document the demolition of the buildings and spaces she grew up in as a child. The result was the first of three video works, titled Farewell Poem (Bie Fu, 2002), followed by River, River (Jiang He Shui, 2005), and The Garden (Hua Yuan, 2007) each of which corresponds to a stage in the flooding of Wanxian.
Together, they form an homage to her childhood memories. There is no script for these layered, fragmented, day-dreamy, and aesthetically stunning documentaries which take the viewer on a disjointed journey through the ruins of Chen’s youth.

Chen has worked in various mediums including photography and performance. She is a selftaught artist and recently began using video to engage her interests. The Hammer will present a selection of her videos, ranging from her first work in 2001 up to her most recent project completed this spring.

Chen Qiulin was born in 1975 in Hubei, China. She lives and works in Chengdu, Sichuan Province. She graduated from the printmaking department in the Sichuan Fine Arts Institute in 2000. Her solo exhibitions have been held at the University Art Museum at Albany, Max Protetch in New York, Long March Space in Beijing, Big Factory in Shanghai, and at Internet Affairs in Chengdu. Chen has participated in numerous group shows in the U.S., Europe and Asia, including Displacement: The Three Gorges Dam and Contemporary Art at the Smart Museum of Art, University of Chicago; the 7th Gwangju Biennale in Korea; China Power Station Part 2 at the Astrup Fearnley Museum of Modern Art in Oslo, Norway; and The Wall: Reshaping Contemporary Chinese Art at the Albright-Knox Gallery/The University of Buffalo Art Galleries, NY. In 2007, she was the recipient of an Asian Cultural Council grant.