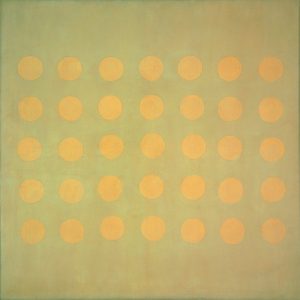 From October 7, 2016 through January 11, 2017, the Solomon R. Guggenheim Museum will present a major retrospective of the work of American painter Agnes Martin (1912–2004), the first since her death. One of the preeminent painters of the twentieth century, Martin created subtle and evocative canvases frequently inscribed with penciled lines and grids, which significantly influenced artists of her time and subsequent generations. Often associated with Minimalism yet kindred with the Abstract Expressionists, Martin was one of the few prominent female artists to emerge from these prevailingly masculine art movements of the late 1950s and ’60s. This historic survey, the most comprehensive ever mounted and featuring more than 110 objects, traces Martin’s career from her lesser-known work of the 1950s to her final canvases of the early 2000s.
Agnes Martin is organized by Tate Modern, London, in collaboration with Solomon R. Guggenheim Museum, New York; Kunstsammlung Nordrhein-Westfalen, Dusseldorf; and the Los Angeles County Museum of Art. The Guggenheim presentation is cocurated by Tiffany Bell, Guest Curator and Tracey Bashkoff, Senior Curator, Collections and Exhibitions.
Filling the Guggenheim rotunda and complementing the architectural lines of the Frank Lloyd Wright building, Agnes Martin includes paintings, drawings, prints, sculptures, and a film, celebrating the scope of Martin’s practice. Arranged chronologically, and with works on paper interspersed with paintings, the exhibition features over 15 artworks that are unique to the New York presentation of the retrospective. Among these is White Flower (1960), which was acquired by the Guggenheim in 1963 and was the first work by the artist to enter any museum collection.
Martin was born in 1912 in Saskatchewan, Canada. She came to the United States in 1932 and became a U.S. citizen in 1950. In the 1940s and early ’50s, Martin lived and studied periodically in the northwestern United States, New Mexico, and New York City. She obtained a degree from Teachers College, Columbia University. In 1957, she settled in Coenties Slip in Lower Manhattan alongside fellow artists Robert Indiana, Ellsworth Kelly, James Rosenquist, Lenore Tawney, and Jack Youngerman. She established her career as an artist, earning her first solo show at the Betty Parsons Gallery, New York, in 1958.
By the late ’50s, Martin supplanted the landscape and figurative watercolors and surrealistic oils from her formative years and began experimenting with different mediums, including the use of found materials and the painting of large simplified abstractions. Her mature works, which began in 1960 and marked a crossroads in the history of abstract painting, are distinguished by square formats, grids, penciled lines drawn on canvas, and compositions with subtle variations in shade and hue. By gently inscribing penciled lines over subdued fields of wash and color, Martin established a geometric and spatial language that she would refine and reinterpret over ensuing decades. Despite her restrained style—and unlike the rigidly formulaic work of the Minimalists—Martin maintained a deep conviction in the emotive and expressive power of art and decidedly handcrafted, delicate surfaces.
Martin left the New York art scene and abandoned painting in 1967 despite the growing interest in her work. In search of solitude and silence, she traveled across the United States and Canada for almost two years before finally settling in New Mexico, where she lived the rest of her life. After a hiatus of several years, Martin published On a Clear Day (1973), a portfolio of 30 screenprints of differently proportioned grids and parallel lines. She began painting again in 1974, continuing to explore and refine her spare style until her death in 2004. Influenced by Asian belief systems, including Taoism and Zen Buddhism, as well as the natural surroundings of New Mexico, Martin sought to evoke meditative contemplation through her art. She often chose titles that suggest a preoccupation with the natural world, such as White Stone (1964) and White Flower, and throughout her career she maintained a particular interest in using art to evoke the experience of nature. She was steadfast in her denial of any representative elements in her work, however, and said about her subject: “It’s really about the feeling of beauty and freedom, that you experience in landscape. I would say that my response to nature is really a response to beauty. The water looks beautiful, the trees look beautiful, even the dust looks beautiful. It is beauty that really calls.”
Martin was honored with the Skowhegan Medal of Painting and Sculpture (1987), Oskar Kokoschka Prize (1992), Golden Lion at the Venice Biennale (1997), National Medal of Arts (1998), and Lifetime Achievement Award from the Women’s Caucus for Art (2005), among other awards.