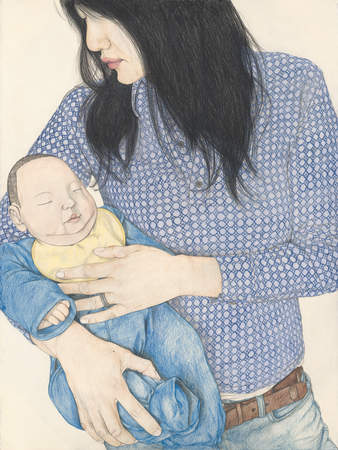 [ad#lb]
In her drawings, sculptures, photographs, and videos, Desirée Holman makes figurative props that she manipulates in role-play games. Here Holman presents the Reborn project, which questions the notion of maternal instincts. Inspired by a subculture of women who purchase incredibly life-like baby dolls and care for them as if they were alive, Holman extensively researched this community and painstakingly hand-crafted several of her own “reborns.” The project also includes Mary Cassatt-inspired color pencil drawings of mothers and their babies and a video featuring several women interacting with the babies in a variety of unconventional scenarios. Holman’s work seamlessly brings together elements of fiction, fantasy, pop culture, anthropology and simulation, as she lures viewers into her games of make-believe. Organized by Ali Subotnick, Hammer curator.

Holman is an Oakland, California-based artist. In 1999, directly after completing her BFA in sculpture at CCA, she attended the Skowhegan School of Painting and Sculpture. She graduated with her MFA from UC Berkeley in 2002. Holman was recently awarded a San Francisco Modern Museum of Art SECA award and a 2007 Artadia: The Fund for Art and Dialogue award. Her work has been exhibited internationally at venues such as the Sao Paulo Museum of Modern Art, Hessel Museum, Yerba Buena Center for the Arts, Los Angeles Museum of Contemporary Art, Milan’s BnD, Toronto’s YYZ, The Hudson Valley Center for Contemporary Art, Berkeley Art Museum and Lisa Boyle Gallery in Chicago. Her work has been reviewed in publications such as Artforum, The Los Angeles Times, NY Arts, Artillery, San Francisco Chronicle, and Artweek.