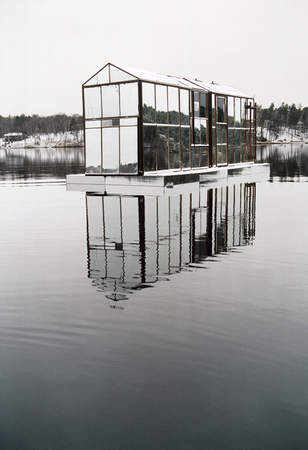 [ad#lb]
Brooklyn-based artist Rob Fischer finds furniture, windows, mirrors, books, flooring, car parts, and other abandoned materials and reconfigures them to create large-scale sculptural environments that are like monuments to a forgotten past. Fischer’s use of these found materials is a commentary on the lifecycle of objects and how those discarded things will inevitably be reclaimed by nature. While his constructions contain an aura of melancholy and we feel the loss and the weight of the lingering presences of those who used these objects, the sculptures simultaneously acknowledge the possibility for transformation and regeneration. In Fischer’s work, decay is inextricable from rebirth. The notion of impermanence and recycling is paramount to the artist’s practice, and he often takes pieces apart and reuses the materials in other sculptures. For the Hammer’s Lobby Wall, Fischer recycles wooden floorboards from an old gymnasium to create a labyrinth-like mural that will extend off the wall. This exhibition is organized by Hammer senior curator Anne Ellegood.

Rob Fischer was born in Minneapolis, Minnesota in 1968. In 1993 he received a BFA from the Minneapolis College of Art and Design. He has received numerous awards including a Jerome Foundation Fellowship in 1995 and a Bush Foundation Visual Arts Fellowship in 1999. He has had solo shows at Ario, Beijing; Max Wigram Gallery, New York; Cohan and Leslie, New York; the Whitney Museum of American Art at Altria, Altria, NY; Mary Goldman Gallery, Los Angeles; and Elizabeth Dee Gallery, New York. Fischer has also participated in group exhibitions at the Aldrich Contemporary Museum, Ridgefield, CT; P.S.1 Contemporary Art Center, New York; the Museum of Contemporary Art, Chicago; the 2004 Whitney Biennial, New York; the Brooklyn Museum of Art, Brooklyn; and the Walker Art Center, Minneapolis.