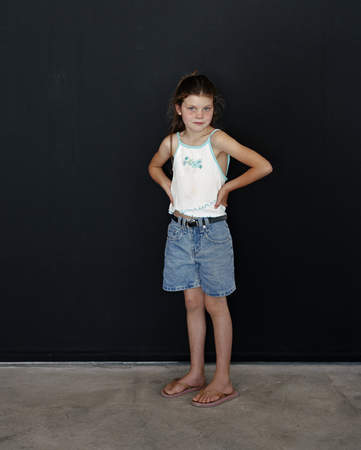 [ad#lb]
Blending rigorous aesthetic concerns with an anthropologist’s sensibility to community, engagement, and observation, Sharon Lockhart uses film and photography to create poignant, beautiful, and intimate portraits. She carefully manipulates formal elements as she explores certain concepts with regularity: portraiture, the relationship between photography and film, and the combination of fictive or choreographed performances with unscripted, intimate moments. The photographic series Pine Flat Portrait Studio (2005) presents a spare,
meditative series of portraits of a group of children the artist came to know during her nearly four-year stay in the rural mountain community of Pine Flat, California while she was shooting her feature length film Pine Flat (2005), itself a cinematic reflection on the act of looking, our relationship to the American landscape, and the subjective experience of time as experienced by children.
These photographs entered the Hammer Contemporary Collection in 2006.

The Hammer Contemporary Collection
In 2005 the Hammer launched a new initiative to build a collection of contemporary art. This growing collection is led by works on paper, particularly drawings and photographs, but also includes painting, sculpture, and media arts. The focus of the collection is on art created in the last ten years. Particular attention is paid to works by artists from Southern California, but the collection also represents artists working throughout the United States and internationally. When possible, artists are represented in depth, and works are acquired in tandem with exhibitions at the Hammer, particularly from the Hammer Projects series.