The Art of Stan Sakai: Celebrating 25 Years of Usagi Yojimbo 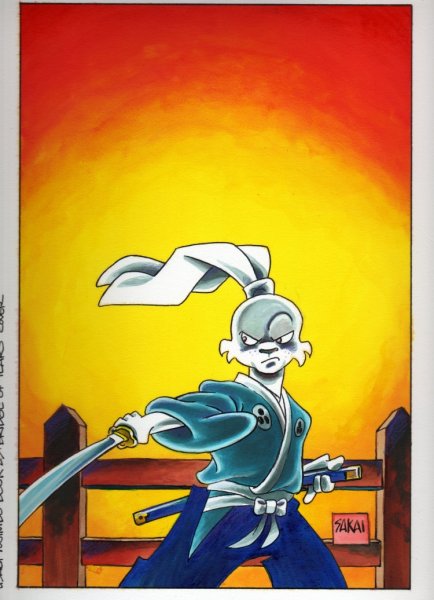 [ad#lb]
The Cartoon Art Museum proudly presents The Art of Stan Sakai: Celebrating 25 Years of Usagi Yojimbo, a career-spanning retrospective featuring over 60 pieces of original artwork by the critically-acclaimed artist. It has been 25 years since Sakai’s signature character, a samurai rabbit named Usagi Yojimbo, first appeared in comic books, and this exhibition follows the entire existence of Usagi, from the very first pencil sketches to completed story pages, covers, and watercolor paintings.

Details about the Cartoon Art Museum’s February 27 opening reception will be announced shortly.

About Stan Sakai: Stan Sakai was born in Kyoto, Japan, grew up in Hawaii, and now lives in Southern California. He received a Fine Arts degree from the University of Hawaii, and did further studies at the Art Center College of Design in Pasadena, California.

His creation, Usagi Yojimbo, is the story of a samurai rabbit in a feudal Japan populated by anthropomorphic animals. Usagi first appeared in Albedo Comics #2 in 1984. Since then, he has been on television as a guest of the Teenage Mutant Ninja Turtles, on clothing, toys, in comic books, games, and in a series of trade paperback collections. His books have been translated into a dozen languages, including Polish and Indonesian.

Stan’s art has been exhibited world wide in venues such as the Japan Tower in Belgium, the Doizeki Gallery in Los Angeles, France’s Centre Nationale de la Bande Dessinee, and the Society of Illustrators in New York. His awards include an Inkpot, multiple Eisners, a Harvey, four Spanish Haxturs, an American Library Association Award, and a National Cartoonist Society Comic Book Division Award.

About Usagi Yojimbo: Usagi Yojimbo is set in the beginning of Edo period Feudal Japan (early 17th century) with anthropomorphic animals replacing humans, and features a ronin rabbit, Miyamoto Usagi, who wanders the land as a shugyosha (student warrior on a pilgrimage) occasionally selling his services as a yojimbo (bodyguard). Hence the title “Usagi Yojimbo.” The character of Usagi has been inspired by the famous Japanese swordsman Miyamoto Musashi while the tone and inspirations of the stories are heavily influenced by Groo the Wanderer, Lone Wolf and Cub and the films of the acclaimed director Akira Kurosawa.

The books consist of short stories, with underlying larger plotlines which culminate into longer, extended story arcs. The stories include many references to Japanese history and Japanese folklore, and sometimes include mythical creatures. The architecture, clothes, weapons, and other objects are drawn with a faithfulness to the period’s style. There are often stories whose purpose is to illustrate various elements of Japanese arts and crafts, such as the fashioning of kites, swords, and pottery. Those efforts have been successful enough for the series to be awarded a Parent’s Choice Award for its educational value. The series also follows the standard Japanese naming convention for all characters, being surname given name.

Illuminating the Bible Christo and Jeanne-Claude: Works in Progress with Q+A