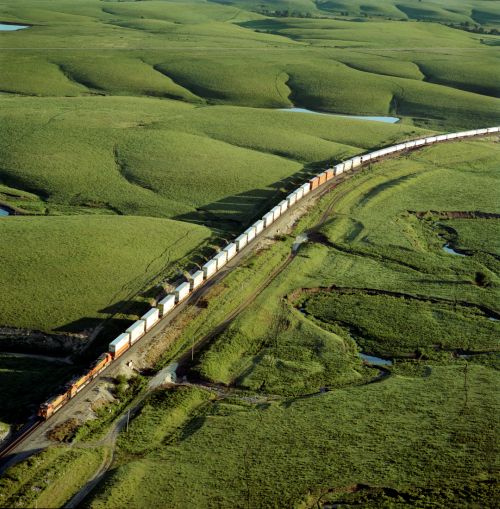 One of the nation’s finest landscape photographers, Terry Evans, is widely recognized for her views of the Midwest prairie, its people, and its artifacts. Her first retrospective, Heartland: The Photographs of Terry Evans, opens at The Nelson-Atkins Museum of Art on Oct. 20 and runs through Jan. 20, 2013.

“Terry Evans is best known for her aerial views of the American Midwest,” said April Watson, associate curator of photography. “From that vantage point she found a fresh, compelling way to look at this uniquely complex, though often overlooked, landscape.”

In recent years, Evans has made sustained explorations of other subjects from a variety of visual perspectives: natural history museum specimens, the city of Chicago, and the steel industry.

“However varied it may seem,” said Keith F. Davis, senior photography curator, “Her life’s work is united by her interest in the intricate relationship between people and the land–the strength and fragility of both, and the effects of time and entropy.”

Because of Evans’s Kansas City background, there is an historic logic to the exhibition.

“Terry Evans grew up in Kansas City, attending classes at the Nelson-Atkins as a child,” said Jane L. Aspinwall, associate curator. “We are immensely pleased that this celebration of her artistic career can take place at the very museum that nurtured her early love for art.”

Born in 1944 and raised in Kansas City, Evans lived for years in Salina, Kansas, before moving to Chicago in the early 1990s. Her love and concern for the prairie–her native landscape, the nation’s heartland–has inspired and informed her entire artistic career. In highlighting the beauty and complexity of a subtle and often overlooked landscape, Evans’s photographs prod us to think more deeply about things too often taken for granted.

Heartland: The Photographs of Terry Evans depicts the photographer’s entire career through 100 prints of varying process and size. Evans’s work is characterized by an abiding sense of curiosity and wonder, a perceptual clarity and directness, and a warm, empathetic engagement with her subjects. Evans has enjoyed a national reputation for more than 30 years; however, this is the first exhibition to survey the range of her achievement, to bring the full scope of her career into focus.

Gauguin and the Voyage to the Exotic Andrea Martinucci