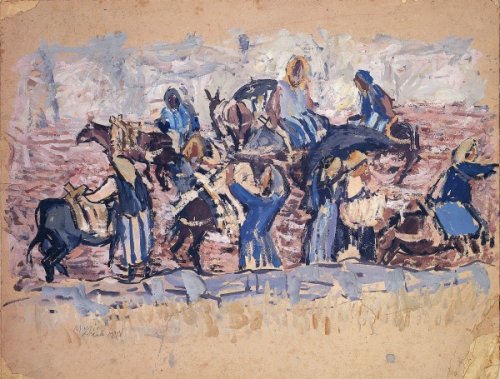 An artist of international standing, viewed as one of the key figures of the twentieth century, Zoran Music hailed from Dalmatia, becoming Venetian by adoption. As a place of fusion between east and west, the city on the lagoon proved to be a source of inspiration and constant point of reference for the artist throughout his career.

Curated by Giovanna Dal Bon, the show features more than eighty significant works, some of which are exceptionally being exhibited for the first time. It offers a precious opportunity to explore the artist’s atmospheric world and the memories he reprocessed above all in Venice.

The artist
A Mitteleuropean wayfarer, who – in the words of the curator – remained forever heimatlos, Zoran Music was born in Gorizia, which at that time was part of the Austro-Hungarian Empire, a crossroads of races, cultures and languages. He spent his childhood in Dalmatia, then as a refugee in Styria and Carinthia. This was followed by Art School in Zagreb, a stay in Prague where he gathered impressions of Klimt and Schiele and the French Impressionists, a long period in Spain discovering Goya, then exhibitions in post-imperial Trieste, where he met his future wife, the painter Ida Cadorin. Then came the move to Venice. After his horrific deportation to Dachau he returned to Venice in 1946, where he lived, alternated with periods in Paris as of 1951, up to his death in May 2005.

The exhibition
The exhibition explores above all the last thirty years of Music’s career, when he took his stark style figuration to extremes. With an oeuvre spanning almost the whole of the last century, Music’s austere, minimal style is indicative of a process of paring things down to their essence.
This can be seen first and foremost in the corpses of Dachau in the cycle Non siamo gli ultimi (We Are Not the Last). After a latency of three decades, in the 1970s Music stated, “I had to go back to Dachau”, alluding to the obsessive resurfacing of those images. Captured in drawings done in secret during his imprisonment, many of which got blown away by the wind on the lorry ride back from Dachau to Venice, he translated those indelible images of his memory into paintings stripped of emphasis, with a harsh, simple purity.
The Figure grigie (Grey Figures) of the 1990s and his final self portraits are also very intense: figures that resist the forces pulling them apart. His wife Ida – his companion in a life devoted to painting – was also a constant source of inspiration: he painted her again and again, alone or in the Doppio ritratto (Double Portrait), where he is depicted painting her, conscious of being in the presence of the unfathomable mysteries of the female identity.
Then there are his stunning images of Venice: interior, highly intimate visions of the city which include works that have never been shown in public before. Venice was the place where Music felt free, where he lived in almost monastic simplicity and spent every day painting in his studio, an attic in Palazzo Balbi Valier in the San Vio district. In his later years Venice appears enveloped in a cloud of ink, or lit by the orange glow of oil pastel, as in the atmospheric visions of Punta della Dogana, Canale della Giudecca, Molino Stucky, and Piazza San Marco.

This thought-provoking exhibition reveals the captivating atmospheres that Music created in his works: vibrations of light, dissolving contours or intense meshes of lines that scratch the surface. Music forged “…figures that inhabit the confines of a painterly/existential territory, at the outer limit of space”, as Giovanna Dal Bon asserts, “Detached from figuration, removed from any function of “resemblance”, they reveal something beyond what is portrayable, forging new relationships within the figure; in this, perhaps, they are extreme”.